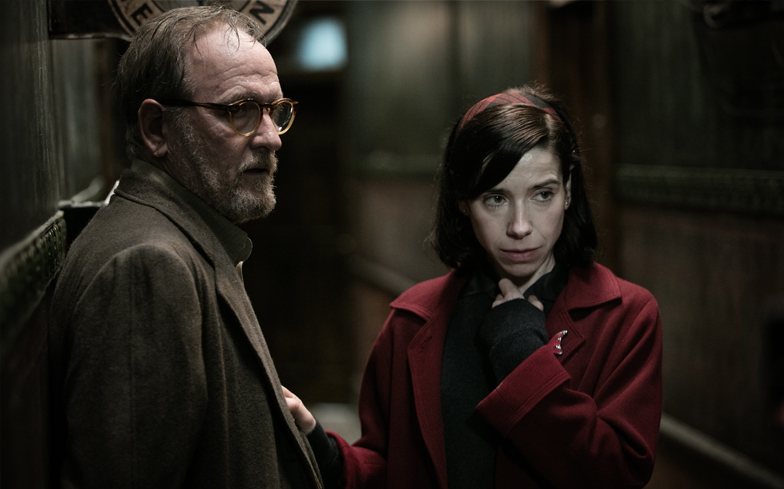 Rightly amassing countless Best Supporting Actor nominations (including an Oscar nod) for his elegant, eloquent performance as a 1960s gay man in Guillermo del Toro’s The Shape Of Water, Richard Jenkins is brilliant as an artist named Giles – a neighbour and best friend to Sally Hawkins’ mute Elisa.

“He’s lonely but I love how he’s always striving for a better life, usually through his art, and how he doesn’t seem to ever give up hope,” says the actor when we meet. “When I read the script I just got him. I was an only child and spent a lot of time on my own and being alone is not always a bad thing but he yearns for more.”

As does Elisa, who in this most fanciful and extraordinary film works in a government laboratory where she meets the unlikely man of her dreams – a reptilian sea creature she’s determined to liberate from his captors.

Giles, meanwhile, is forced by the social conventions of the era to hide his sexuality, even though he pines for a young waiter. “It was a very different time,” says 70-year-old Jenkins, a straight man who was in high school in 1962 when the film is set. “I never knew any gay people because they were all in the closet, which you only find out when you go to a high school reunion all these years later. Being gay wasn’t even on the radar back then. I had a great time growing up then but I wasn’t a woman, I wasn’t black, I wasn’t gay. Unless you were a white man, it wasn’t so great.”

A literal fish out of water story, Guillermo Del Toro’s beautiful film (in cinemas now) is a metaphor for what it means to be Other. Richard sees it as part of a welcome movement towards more inclusivity in movies, saying: “You’re seeing more of the world now, a truer representation of what the world is. It’s really exciting. And this is a film about tolerance and acceptance. You can’t control who you love. Whose right is it to tell you who you can and cannot love?” Born in Illinois, the former laundry truck driver has been gainfully employed as an actor since the 70s but it wasn’t until a certain HBO show called Six Feet Under, which debuted in 2001, that he got the recognition he deserved. He played the deceased father of gay funeral director David Fisher (Michael C. Hall) and has nothing but admiration for showrunner Alan Ball, who channelled some of his own experiences into the character of David. “HBO just said, ‘You go buddy, you do whatever you want to do’ and what Alan did was extraordinary,” hell tells Gay Times, admitting to being both surprised and thrilled by how the boundary-pushing show took off. “I knew it was really special but I didn’t know if everybody else would think so. I knew we had something different but I didn’t know how it would be received.”

Through flashbacks we learned that the patriarch knew his son was gay and was proud of him. “But they never talked about it. That, for me, was the message of the show: Talk to people. Tell them who you are, what you are, before it’s too late.”

Prior to Six Feet Under, Richard was in the 1993 TV docudrama And The Band Played On, adapted from Randy Shilts’ acclaimed book about the AIDS epidemic. He played Dr Marcus Conant, a dermatologist who was a pioneer in AIDS treatment, and signed on for the role because “it was an important issue based on an incredibly interesting book”.

The actor’s long and varied CV also includes Flirting With Disaster, where his subtly pitched turn as a gay FBI agent earned him an Independent Spirit Award nomination. “It’s one of the reasons Guillermo cast me in this. He said ‘You were playing a man who just happened to be gay’.”

Director Guillermo del Toro has praised Richard for making Giles ‘completely real, completely there’. It’s a perfectly modulated performance with an occasional twist of the wrist rather than showy gestures. “I didn’t do anything deliberate in terms of posture or how I walked because I didn’t want it to be a caricature,” says the actor, adding that despite the era he lives in Giles isn’t trying to be someone else. “He’s very comfortable with his sexuality. There’s no shame there. He’s like ‘It’s not my problem, it’s society’s problem’. I like how Guillermo wrote a full character with his own life and his own world.”

Sharing the awards nomination love that’s not just come his way but is also being showered upon the film and its director, Richard beams: “I think Guillermo is a frickin’ genius and this movie is as good as movies get.”