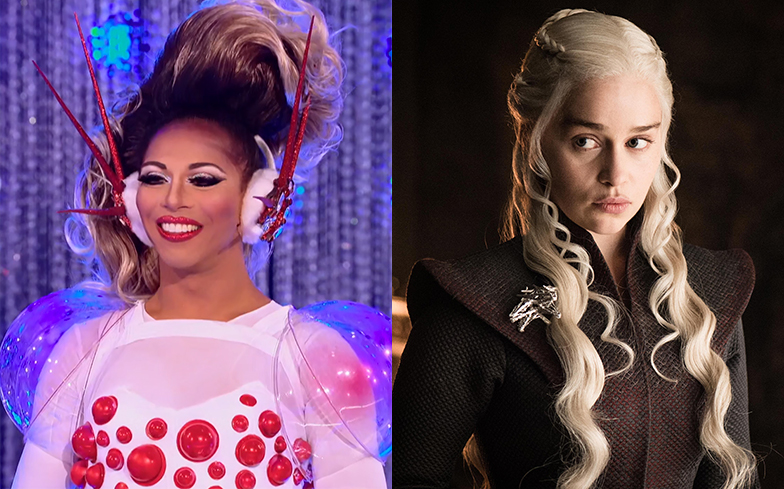 Could we see Shangela on the Iron Throne?

She may not have won RuPaul’s Drag Race All Stars 3, but thanks to a brilliant Snatch Game performance, epic lip syncs, and a string of iconic runway looks, finalist Shangela has cemented herself as a firm fan favourite.

One of the most memorable moments from her time on the show was her constant Game of Thones references, and whether you love them or hate them, there’s no denying that Shangela would make a fierce Mother of Drag-ons. And while a cameo might be a no-brainer, what we really want to know is which character she’d play…

“Well, if I could get my blonde wig out, I’ll be Daenerys’ long lost sister, okay?” she joked. “I’m another sister, I’m a Targaryen, I’ll have my own dragons, okay? I’m gonna show up with four dragons! I would love that.

“The cool thing is that Lena Headey, who plays Cersei Lannister on the show, shared an Instagram post in which she wrote #TeamShangela right before the finale – oh my god! I was living!

“I thought, ‘Baby, there’ll be peace in Westeros after all, honey!'”

You can read more from our Shangela interview here, where she revealed whether or not she’d return for another All Stars, and addressed the negativity that her and other queens face from social media and forums like Reddit.

The drag superstar recently revealed she’ll be starring alongside Lady Gaga in her A Star Is Born remake, but if you can’t wait for that soon-to-be iconic performance, you can catch her in the shequel to Hurricane Bianca, which is due for release on 18 May.

Oh, and she’s just released a killer new dance anthem called Pay Me featuring Ryan Skyy, and a music video is on the way later this year.