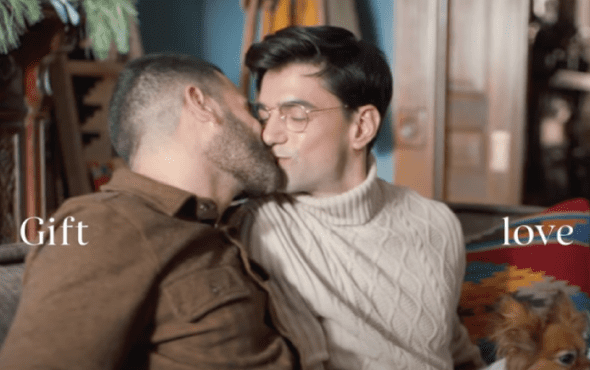 A holiday advert celebrating gift giving and community has been labelled “perverted” by an anti-LGBTQ+ online Christian network.

One Million Moms, an evangelical anti-LGBTQ+ group backed by the American Family Association (AFA), has taken to the internet calling for followers to boycott and report the new advert.

Sephora’s 30-second video titled “Holiday Gifting 2021: It’s the Beauty You Give” shows a heartwarming collection of scenes of individuals joyously receiving gifts. However, the Christian network found fault with the inclusive promotion as it features two men sitting together, who share a kiss, while the screen reads “Gift love.”

The advert was not positively received across all boards. “The way this advertisement is pushing the LGBTQ agenda is very concerning, but what is even more concerning is that this commercial is airing when children are likely to be watching television during family viewing time,” Cole complained online.

Taking matters a step further, the network urged its audience to sign a petition to have Sephora pull the Holiday Gifting Christmas advert.

“The homosexual couple is the only romantic couple included in the advertisement,” she posted online.

“Sephora’s primary customer base is women, yet the company ends the commercial with two men kissing. Promoting same-sex relationships should have nothing to do with marketing makeup and skincare products.”

Challenging this message, Sephora shared a message promoting further inclusivity captioned beneath the video. “Give more than a gift this holiday season. Because the people on your list aren’t just names to check off,” the company wrote.

Users online positively responded to the representation, thanking the makeup brand for a representative holiday advert.

“Thank you SO MUCH Sephora and all of your collaborators for being strong. Our community needs this exposure, and I would like to reiterate LOVE IS LOVE,” an account posted in the YouTube comments.

Another reiterated a similar sentiment and praised its direction: “Love this little commercial. It makes you feel right at home and all warm inside ready for the holidays.”

One Million Moms have established a reputation for challenging contemporary adverts that encourage visibility. Notably, in 2019, the network prompted Hallmark to ban an advert due to its inclusion of a lesbian couple.

While the advert was temporarily halted from running, Hallmark’s management issued an apology to the LGBTQ+ community.

President and CEO, Mike Perry of Crown Media Family Networks, the parent company of the Hallmark Channel said the “wrong decision” had been made to CNN Business.

“The Crown Media team has been agonising over this decision as we’ve seen the hurt it has unintentionally caused. Said simply, they believe this was the wrong decision,” Perry said in a statement.

Cole and the AFA -an organisation that opposes LGBT rights and expression, pornography, and abortion – have challenged brands that show support for causes with which they publicly disagree. According to LGBTQ+ Nation, this has included the likes of Oreos, a hummus brand, a dishwashing detergent brand and more.

You can watch Sephra’s Holiday Christmas advert here or below.