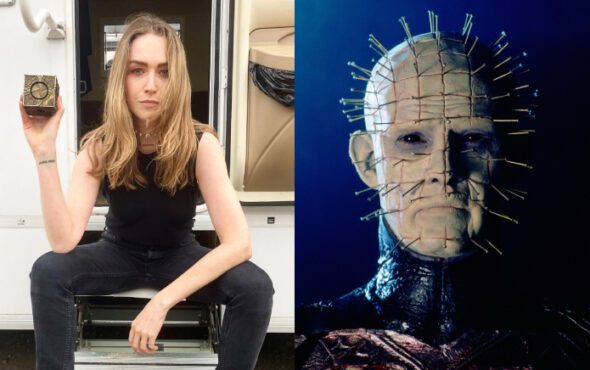 The upcoming Hellraiser reboot has found its Pinhead in Sense8 star Jamie Clayton, marking the first time a woman will play the iconic villain.

Directed by David Bruckner, the film has reportedly already wrapped filming. Clive Barker, author of the Hellraiser novels and writer/director of the original film, served as producer.

Clayton is best known for her role as Nomi Marks in Netflix’s beloved cult series Sense8, as well as for playing Sasha Booker in Designated Survivor, Tess Van Berg in The L Word: Generation Q and Charlie Cameron in Roswell, New Mexico.

The star celebrated the news with a picture holding the iconic puzzle box from the film series, with the caption: “Demons to some. Angels to others. #Hellraiser.”

Peter Oillataguerre, President of Production for Spyglass, said in a statement: “Next year marks the 35th anniversary since Hellraiser first haunted our dreams.

“It’s only fitting to come full circle in collaborating with Clive, the original creator and master of visionary horror. We look forward to working with our partners at Hulu in bringing this unique take on the original to new audiences.”

Bruckner added: “It’s been such an honor to have Clive onboard to help support and shepherd us through the incredible universe he created so long ago.

“Combined with a fearless and committed cast, including the amazing Jamie Clayton, who fully embodies the role as the Hell Priest, we’re aiming to create a very special new chapter in the Hellraiser legacy.”

“This is a Hellraiser on a scale that I simply didn’t expect,” he added. “David and his team are steeped in the story’s mythology, but what excites me is their desire to honor the original even as they revolutionize it for a new generation.”

The original Hellraiser film, released in 1987, starred Doug Bradley as Pinhead. Although the film wasn’t a smash hit at the box office, it has since been recognised as a cult classic in the horror genre. Nine sequels followed, the first seven of which saw Bradley return as the character.

The reboot is expected to premiere in 2022 on Hulu.