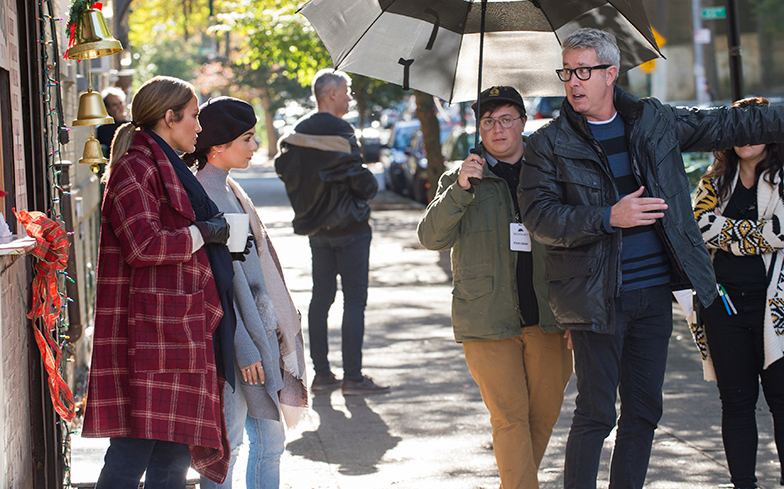 “I think the mainstream is realising that this is the way of the future, and that love is love.”

Peter Segal has directed some of the most legendary comedies of the 21st century (fact!).

The American filmmaker and screenwriter first rose to prominence for his work on the 1995 comedy Tommy Boy, which has achieved cult classic status since its release. He followed it up with films such as Nutty Professor II, Anger Management, The Longest Yard, 50 First Dates and Get Smart.

His newest release, Second Act, sees Jennifer Lopez return to the rom-com genre as a woman who pursues a career as an accomplished consultant after her best friend creates a fake resume. The film has grossed over 50 million at the worldwide box office and has received praise from fans and critics for its themes of female empowerment.

This Friday, Second Act will make its UK debut, so we jumped on the phone to speak to Peter about working with Jennifer Lopez and Leah Remini, and LGBTQ representation in future rom-coms.

What drew you to the story of Second Act?
Well, not a lot of movies like this are being made anymore. This harkens back to a Mike Nichols era, for me, who was one of my heroes growing up, Working Girl, Nora Ephron, these kind of personal stories are being left by the side of the road. I think unless it’s Oscar fare or a superhero movie, the old feel good comedies are not seeing their light anymore. So, that combined with the opportunity to work with Jennifer, who I’ve been a fan of for many years, coming back to a genre that made her who she is, those two were very factors for me.

It feels like rom-coms aren’t being advertised as extensively as they used to be…
Now it’s interesting because Netflix is cashing onto that and they’re doing them, but none of the majors really, they’re not doing rom-coms. But this is also a movie that has a little bit of a surprise, as you know, and it may appear as a rom-com but then it becomes something else. What was your reaction to the surprise in the film?
It felt like there was a whole genre of people dawning a new identity to fit into a new club, and the audiences watching the fuse burn down and know at some point there’s going to be a collision of truth and honesty. You got in the door, you got to go to the ball, you got to work at this business, now the relationships that you made based on that lie are going to come and bite you. In other movies, that relationship is always a male interest for the woman. And so to me, and it’s hard to talk about this without ruining the surprise for people who haven’t seen the movie, that was the difference in this story. Jennifer and I completely agreed that that’s what made this story unique and not a carbon copy of Working Girl.

The film featured so many powerful women who were focused on their families and their career. Do you think we need more rom-coms like this, as opposed to ones focused on romance?
Yes I do, and also I thought the story was about friendship and how we help one another overcome our failures in our life, and Maya’s character has a great support system with her friend, led by Leah Remini, who did an amazing job. I think that kind of camaraderie, especially in today’s MeToo movement, women helping women, overcome not only their financial hardships but choices that they made and coming to terms with those choices, and supporting each other along the way. I think those were good messages.

What was it like to work with Jennifer on the film?
I have to say, she is a phenomenal actress. She really is so intuitive as a storyteller. She made my job very easy because once we got the script in shape, we were very in sync, and she is so subtle and reactive, and that’s really what acting is. It’s reacting. And she’s so good at that, a part of a rare breed that segway from pathos and heart to comedy. Not only in this movie, other movies. Out of Sight and Selena was where she established herself, but she really came into her own in her early romantic comedy work, and I felt like there was an opportunity in this story to see both sides of her talent.

She stars alongside Leah in this film, her best friend. What were they like on set?
The first time that I got to rehearse with both of them, I went to Jen’s apartment in Manhattan and Leah was there. We started reading through the script and we could barely get through any scene without Leah poking her in the arm and Jen pushing her and them insulting each other playfully. I said, ‘You guys are like sisters.’ And then they would push me and tell me to shut up, and I said, ‘Wait wait wait. This is like dinner at my house growing up, we have to put this chemistry on screen.’ And so Leah said to me, ‘I’m game to ad-lib and improvise if you allow me.’ And one example of that was on set when Leah slapped her. I’m so glad that Jen didn’t break character, but she just popped Leah back, which you can see in the take. I’m so happy that Leah didn’t start cracking up because she was on the verge! She had red finger marks on her cheek from Jen and that was kind of an accident, but that’s what you get with improv. How did they both react after that take?
They laughed. That was like one and done, you don’t go back and try and capture lightening in a bottle twice. That was the take that we did, and that was the one that wound up in the movie.

I can’t wait to watch that back… What do you hope audiences take away from Second Act?
First of all, I hope audiences are entertained and they come, forget their troubles and laugh. That’s what we’re doing, we’re entertainers. Secondly, there is a nice message in this film and it’s about never giving up. This is a hispanic woman in her 40s who feels that she was dealt a certain hand in life, and maybe that’s what she should settle for and stop pursuing her dreams. With the inspiration from her friends and support system, she realises it’s not too late and she reaches for the stars, in a complicated way that may not be advisable to other people, the root she pursues. She comes to terms with the fact that, at the end of the day, the mistakes she has made are part of who she is. A lot of people need to look in the mirror and forget about feeling sorry for yourself, if you feel the same way. Never keep trying, keep dreaming.

You’ve directed some of the most iconic rom-coms of the past decade. Would you like to see more LGBTQ stories in the genre?
Absolutely. I think comedy is always cyclical and I think rom-coms may have been dormant in the past few years, but something always fresh needs to come along and reinvigorate the genre. I think showing diverse people in relationships, both racially and sexually, is what may be the ticket to reinvigorate the art-form again. What makes anything stale is repetition, and I think now is a great time to show, as in this case, a woman of colour succeeding on Madison Avenue in a male dominated world, and that was our own small contribution to that. But yes, absolutely, I think it’s time to see a lot of different relationships in rom-coms.

We had Love, Simon last year, which became the first major Hollywood studio film to focus on a gay teenage romance. Do you think the world is ready for more stories like this?
Absolutely. We live in very different times from even when I grew up in high school, when no one was out of the closet. Now, high school students are encouraged to come to terms with their identity and to be accepted. I think, as a parent of someone who just graduated from high school, there’s an awareness now for acceptance. That is a great message to preach right now, especially in our country, it isn’t always welcomed politically with welcome arms. I think the mainstream is realising that this is the way of the future, and that love is love.