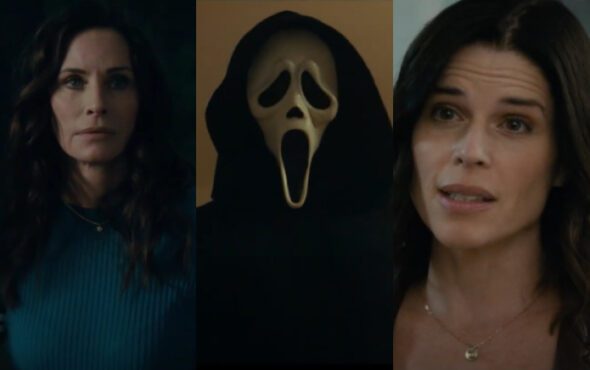 Neve Campbell, Courtney Cox and David Arquette are back in the first horrifying trailer for Scream 5.

After the new series of murders begin, Dewey Riley (Arquette) calls Sidney Prescott (Campbell) to bring her back to her fateful hometown, where the two of them reconcile with Gale Weathers (Courtney Cox) to take down another copycat killer.

“It’s happening, three attacks so far. Do you have a gun?” asks Dewey, to which our favourite heroine responds, “I’m Sidney Prescott, of course I have a gun.” Later, Dewey says this string of murders feels “different” to others.

The trailer also teases a sticky end for Barrera’s character, who might receive the Drew Barrymore treatment in the opening, as well as Minnette and Quaid’s characters. It could be throwing us completely left-field, but it hints at a major death for – spoiler alert! – turn back now! – we warned you! – Dewey.

Arquette’s fan-favourite cop can be seen going head-to-head with Ghostface, before Gale screams in horror at a crime scene. Would they dare?

The highly-anticipated fourth sequel was directed by Matt Bettinelli-Olpin and Tyler Gillett, who received acclaim for their work on 2019’s horror film Ready or Not.

Marley Shelton is also set to return as her Scream 4 character Judy Hicks.

Simply titled Scream, the upcoming slasher is the first in the series not to be directed by horror mastermind Wes Craven, who passed away in 2015.

Speaking with EW, Cox said she “felt extremely emotional and felt a real missing and longing for him” as soon as she walked onto the set.

“He had such [a] special, kind, and caring quality about him, not to mention his incredible talent as a filmmaker,” said the Friends star. “I looked up to Wes immensely professionally but also as a friend. I feel Wes would be so happy with the way Matt and Tyler have rebooted this franchise.”

Arquette said: “I’m not overly religious or anything, but I definitely was speaking to him, praying about it. It brought back a ton of memories of Wes, and that was emotional, you know, but it was beautiful. There were little signs. There were certain takes where the wind would blow, and, I don’t know, I just felt his energy.”

The first Scream was released in 1996 to praise and is widely credited with revitalising the once-stagnant horror genre. A sequel was released to similar acclaim one year later, while the 2000 threequel received mixed to negative reviews.

Check out the first incredible trailer here or below.