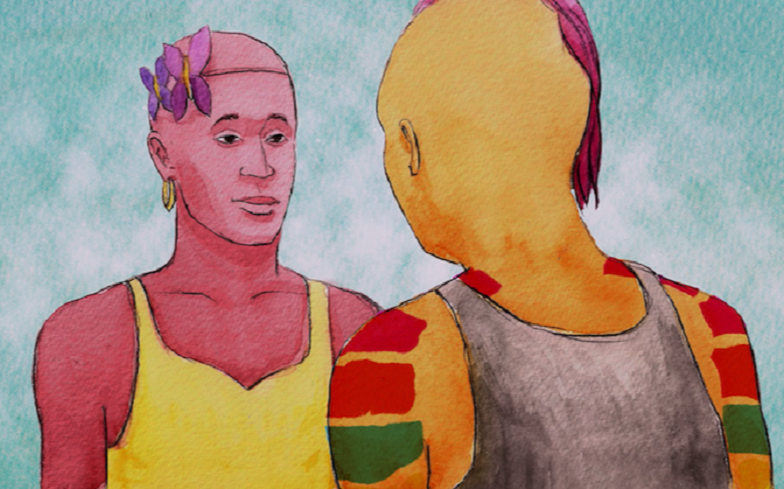 Vision Portraits has been airing this week, while TRANSFINITE will air next week.

The Scottish Queer International Film Festival (SQIFF) will broadcast two feature-length films, both this week and next week. This week’s focus is on Rodney Evans’ vivid documentary, Vision Portraits, and it has been airing since Monday (15 June), and will finish tomorrow (21 June).

Vision Portraits is a vivid and hypnotic feature documentary that showcases the stories of four visually impaired artists. The film follows photographer John Dugdale, dancer Kayla Hamilton, writer Ryan Knighton and the filmmaker himself, as Rodney contrasts their journeys with his own personal and professional one as a filmmaker gradually losing his vision.

Rodney’s self-reflexive approach emphasises how each artist has adapted creatively and thrived as their process evolved with their unique perspectives. There will also be a live Q+A with Rodney Evans broadcast tonight (20 June) on SQIFF’s Facebook page.

Next week, SQIFF will focus on Neela Bhuman’s sci-fi omnibus, TRANSFINITE, seven standalone short stories where supernatural trans and queer people from various cultures use their powers to protect, love, teach, fight and thrive. The film will also air alongside some short, Black, queer films, including FETISH and Something in the Closet.

Meanwhile, Something in the Closet, directed by Nosa Eke, is about a queer, Black teenager struggling with her sexuality, as her desires manifest their way from the depths of her eerie closet into reality.

These films will be airing from 25 June to 28 June, and on 27 June, there will be a live discussion with Black queer UK artists.

Tickets can be purchased from the SQIFF website, on a sliding scale of paying either nothing or upwards to £8.

Helen Wright, SQIFF Festival Co-ordinator, said: “We are really pleased to be able to screen these stunning films online to give audiences a chance to experience them.

“We are really mindful of the hard time many queer people in isolation may be having and all the stresses caused by world events. The films we are showcasing and online Q&A conversations we will host are intended to create spaces for accessing queer community, healing, and sharing ideas.

“We are also looking forward to our main festival in October, where we will get to share lots more work and love with our communities.”

The films are screening in partnership with LGBT Health & Wellbeing, they’re also supported by Film Hub Scotland, part of the BFI’s Film Audience Network, and funded by Screen Scotland and Lottery funding from the BFI.

The sixth annual Scottish Queer International Film Festival will run 14 to 18 October 2020, with the full programme released in August.