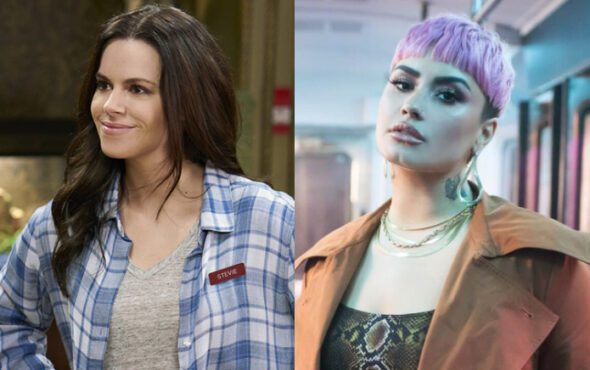 Schitt’s Creek star Emily Hampshire revealed that Demi Lovato slid into her DMs asking to “kick it” during a new interview.

While appearing on the 4D with Demi Lovato podcast, Hampshire opened up about first meeting the pop singer and that infamous DM.

“Can I say how we first met… not even met because I think it’s really funny,” Hampshire began.

After encouragement from Lovato, the 40-year-old actress dived into the story, stating: “You slid in my DMs and you said, ‘Hey I like you on the show, we should kick it sometime.’

“And then you said below it, ‘And by kick it, I mean go on a date… I find you attractive’ – you made it clear that it was a date.

“I loved that because sometimes that’s confusing and I’m decades older than you so I was like ‘Kick it?’ I was like looking it [up].”

The Cool For The Summer singer echoed similar sentiments and revealed Hampshire’s hesitancy to date due to their age difference.

“You were like, ‘I’m decades older, I don’t think we’ll find the same things funny, and I was like ‘Hmm excuse you’ and then I sent you a really good meme,” they said.

Hampshire continued to poke fun at Lovato and said that the singer told her to “think of Sarah Paulson and Holland Taylor.”

But all wasn’t lost for the two stars, after their hilarious interaction they ended up becoming close friends.

“So I was like ‘what’s the worst that could happen’ and then I made a really good friend. Do you know what I’m saying? You’re a dope friend and I’m happy we became friends after that.”

Elsewhere in the interview, Hampshire also discussed how Schitt’s Creek inspired her to come out as part of the LGBTQ+ community.

“David Rose says, ultimately he likes the wine, not the label, and that he’s pansexual. I had never heard the word pansexual before,” she said.

“I’ve always considered myself super knowledgeable about LGBTQ+ stuff just because everybody in my life, my friends, are all mostly LGBTQ+ people, but I didn’t know this.”

She went on to say that, while dating trans singer Teddy Geiger, fans began to speculate about her sexuality.

“I said to Dan, I was like, ‘This is so weird. What am I?’ Because I truly just fell in love with a person and where they were on the gender spectrum did not matter to me,” she explained.

“And since then, it really doesn’t matter to me. I have to like the person. I’m really attracted to a person’s vibe. He was like, ‘You’re pansexual. Don’t you watch our show?’”

Watch the full hilarious interview below or here.