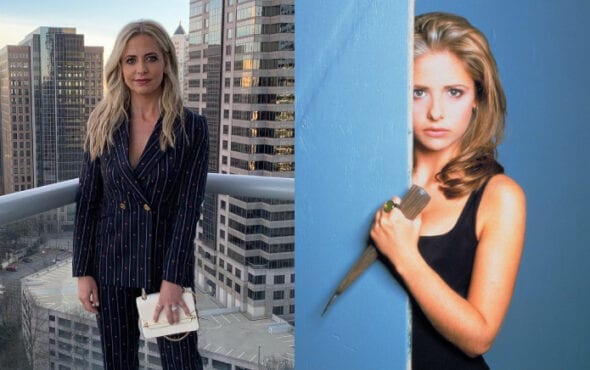 “She taught that the the hardest thing in the world is to live in it.”

Sarah Michelle Gellar has paid tribute to her signature character, Buffy Summers, on what would’ve been her 40th birthday.

The legendary actress, who played the iconic vampire slayer for seven years, wrote on Instagram: “I just realized that today is Buffy Summers 40 bday. I can’t even believe that. She taught that the the hardest thing in the world is to live in it.

“So in her honor let’s all be brave. Live. This may not be the way we are used to living our lives, but let’s find the beauty. So we can all live long and safely.” Gellar then celebrated Buffy’s birthday with several hashtags.

Last year, the Emmy Award-winning star left fans slain (pun absolutely intended) after sharing a picture of herself holding a stake. In her caption, she declared war on the coronavirus pandemic with a classic Buffy quote.

“If the apocalypse comes, beep me,” Gellar wrote, which led Selma Blair – her best friend and Cruel Intentions co-star – to respond: “And the adventures begin. Can I be your sidekick?”

Created by Joss Whedon – who went on to write and direct The Avengers and Avengers: Age of Ultron – Buffy focused on a teenage girl bestowed with supernatural abilities to defeat vampires, demons and the forces of darkness etc.

Buffy received widespread critical acclaim – with many individual episodes hailed as some of the finest in TV history (Hush, The Body, Once More, with Feeling) – and has also been credited with influencing other series in the same genre. In 2018, a reboot with a “black Buffy” was announced by Whedon and Fringe writer Monica Owusu-Breen.

Addressing the initial negative response, Owusu-Breen confirmed that we’re looking at a revival instead of a full-blown reboot, tweeting: “For some genre writers it’s Star Wars. Buffy the Vampire Slayer is my Star Wars.

Last year, we took a look back at some of the show’s queerest episodes, including Becoming, Doppelgangland and Once More, with Feeling – see here.