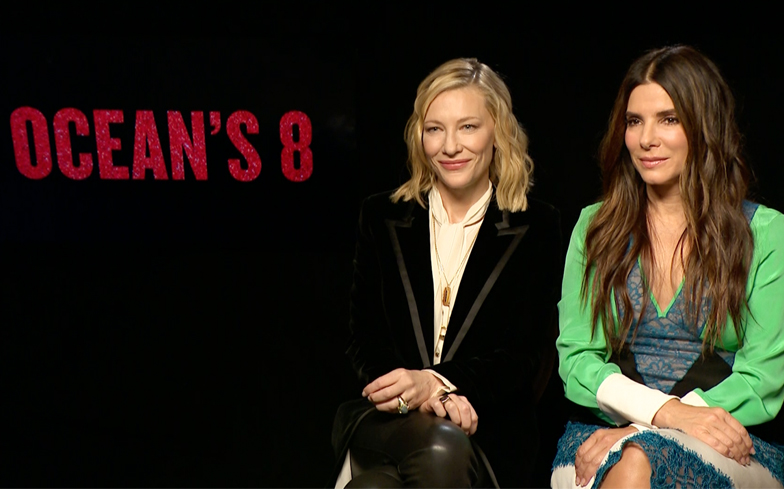 For most of us, watching Ocean’s 8 is going to be the closest we’ll ever get to getting a peek into the most exclusive party on the planet that is the Met Gala.

It’s a fun-filled and fabulous film, packed with witty dialogue, plenty of girl power, and some seriously spectacular outfits.

Gay Times caught up with Sandra Bullock and Cate Blanchett to talk about how they managed to recreate the Met Gala scenes with an ensemble of A-list background extras.

Fans who have seen the film have also commented on the queer undertones between Sandra and Cate’s characters, Debbie Ocean and Lou respectively.

The chemistry between the two is undeniable, and there are plenty of nods to a romantic past.

We asked the pair if the subtle hints were intentional or if it’s just something viewers have picked upon, and you can see their answer in our video interview above.

Elsewhere, Sandra also spoke about what she would like to see in a potential sequel, including additions to their all-female gang.

“People ask, ‘Who would you like for Ocean’s 9?’, and the nicest thing about the inclusivity and diversity that already exists is we can have all different types of women,” Sandra told us.

“Transgender? It’s a different time and we like to see movie that reflects what’s real, what exists, and what the world looks like.” We also asked the two actresses how we ensure that all-female casts, LGBTQ representation, and racial diversity isn’t just box-ticking by the major studios, and that it actually becomes part of the fibre of Hollywood going forward.

“There’s so much in development,” Cate Blanchett told us. “I think women, and people of different races and sexual persuasions are no longer sitting back and waiting for that change to happen. They are agents of that change.

“It’s much more creative place to be, for men, for women, for everybody if all of those voices are being heard. It’s when every five years people say, God things have gotten a bit stale. It’s because the same old white men are green-lighting the same old white grey men pictures, and Ocean’s 8 isn’t one of those. This is much funkier, wittier, sexier and fresh, and I think than that type of film-making.”

Sandra added: “The streaming world has really influenced and is representing what our world really looks like and what we want to see. It’s also influencing cinema. In order for something to work, people have to go see it. What are we making that people want to see and will leave their house and get a sitter, or time off from work. What is it that excites people and gives them a place to escape.”