Sam Bluer on coming out, homophobia in Australia and his love for Charli XCX 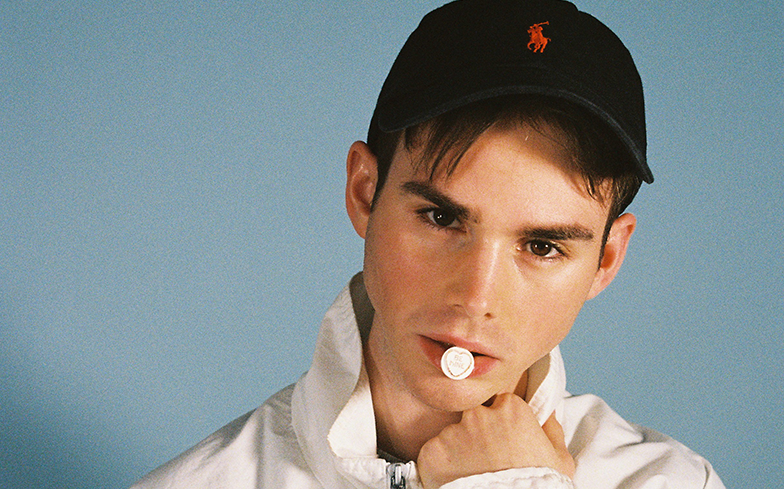 “Our government gave homophobes a platform to hate, and it was a really terrible time for a lot of queer people throughout Australia.”

It’s so totally cliché to say, but we’re gonna say it: Sam Bluer is a name you’ll be hearing a lot more of in the future.

The Aussie performer made his music industry debut this year with two fantastic dark-pop tracks, Shift and Body High, the latter of which literally catapulted our wigs down the motherfucking street. The lyrics! The production! The video! We live!

To celebrate the release of his brand new clip, we got him on the phone and spoke about, well, everything: Boy George, privilege, homophobia in Australia, his obsession with Charli XCX, and coming out. Enjoy!

We’ll start off easy. How did you get into music?
I was always into music during high school, like I was obsessed with it. In terms of pop music, I didn’t really know how to get into it, it’s such a mysterious world. So I saved up a lot of money, went to LA, and I literally DM’d producers that I had seen working with stars like Tove Lo, Rita Ora and stuff, and then I got into sessions with them.

That’s very 21st century.
Literally. I was like, ‘Here’s some shitty demos, work with me!’ and luckily a few of them were free during the period I was there.

Who were your influences growing up?
I was super influenced by the classics like Britney Spears and Madonna. Pink’s M!ssundaztood album is like, iconic. That’s one of my favourite albums ever.
I completely agree, it’s incredible. Who else? There were so many people like Beyonce, just like really classic commercial artists. It wasn’t until I was like 18 that I started realising there was this whole new age world of pop artists that had come up, and I’m so obsessed with it now. But at that time, it was just what was on the radio.

Totally. With streaming, we can access so many more artists.
Yeah, it’s changed the whole game. Like it wasn’t as accessible. If there was no money behind it, you didn’t know who they were.

Even stars now like Charli XCX and Tove Lo, they’re not topping the charts, but their fanbases are massive.
Yeah, for sure. I think also, that idea of charting has changed. In my eyes anyway. For me, if I never chart – obviously it would be lovely – but I’m obsessed with like Charli, Tove and Raye, and all these people from the UK. If they never chart, that’s never worried me, their music is so important regardless.

Have you listened to Charli’s new song? I stan.
Girls Night Out? Yeah, obsessed! It’s so good. I’m so excited, I hope she releases another album soon.

Yeah, or another mixtape, I’d be happy with anything.
Yes! A mixtape. She’s so cool. See, she’s someone who’s really trailblazed through the music industry and kind of created her own complete lane. It’s also like she’s opened up doors for artists who possibly are signed and their label is confused what to do with them, and I think a mixtape is such a great job getting music out, getting content out, and still feeling creative when you’re kind of, I don’t know, locked in a prison. You hear stories. I luckily love my label, but you hear stories…

Charli seems to have taken control. Like, we got two mixtapes last year. 10 tracks each.
Yes, and both were fucking incredible.

I went off on a bit of a tangent there with Charli didn’t I?
No, I 100% could talk all night about Charli XCX.

Same. So you loved Britney, Madonna, Pink. Did you have any gay role models?
Do you know what’s really funny? So, Courtney Act did Australian Idol back in 2003, and I was obsessed with her. She put out a single, and I was like, ‘This is the coolest woman’, and honest to God, I didn’t know that she was a drag queen at the time, because I was so young!

And she is so fishy.
Yeah! And no one pointed it out to me, so I never knew. But yeah, Courtney Act was definitely someone, especially musically. But I don’t really feel like there were many people that I knew of, I feel like it wasn’t like today. In saying that – I’m going to interrupt myself – as I’ve gotten older, I am obsessed with Boy George and Culture Club and that whole period of time. I think he was so revolutionary in terms of LGBTQ presence. It’s such a weird phenomenon that he was so celebrated back then, and yet it’s been such a struggle since. There are artists who paved the way, 1000%, but back in the 80s, to be such a strong LGBTQ icon at that time is so incredible. I’ve watched every documentary about them, their fashion, their music, it’s all so impressive to me.

Your icons have clearly influenced your material. Can you tell us a little bit abour your new single Body High?
The song is so important because when I went to LA, I wrote a few songs and then they got the attention of my label now. But they were like, ‘We love your stuff, but we need a song’. I was like, ‘Oh fuck’. My friend Maddy Rowe and I were just hanging out, we knew each other through a few people and we were sitting in her bedroom studio, and I was like, ‘I really wanna write a song where ‘High’ is in it somewhere’. I kind of things figured out with my sound, especially coming back from LA, but it wasn’t like I knew exactly who I was. I got this beat from a producer over there, and it reminded me of like Swedish pop. We then wrote the song in like 45 minutes to an hour, and didn’t really think about whether it would be a single, it just happened. I was always obsessed with dark pop, but I hadn’t found that perfect middle ground of dirty melodies and the dark production with a good hook type thing, and then we wrote that song and it all came together for me. Ever since then, I’ve been so clear on who I am and what I write about. I also wanted to – with such a classic scenario that every song is written about – take it from more about the passion, rather than the pain. Stuff I write about, I want to write from an uncomfortable lore and awkward positions rather than the classic clean-cut ones. My other song Shift is literally about me not wanting a relationship while I was dating people, because I think it’s more interesting to talk about the things you can’t really talk about.

The video for it is unapologetically queer. Is it important for you to showcase and normalise same-sex relationships?
1000%. I think for me, I’m very aware of the privilege I hold in being a white gay male, and I think it’s important that I make sure to speak about knowing my privilege as well. If that video can show anything, it’s that there are places in the world and there are people in the world that will be accepting of everyone. From being 17 onwards, that’s the world I’ve been immersed in, and I’m in a really happy, comfortable bubble, where of course you get called names occasionally, but it’s a privileged bubble in the terms of queer people celebrating queer people. I live in the north of Melbourne and it’s super progressive here, environmentally and for LGBTQ rights, which I feel very lucky to be a part of. Do you mind telling me a little bit about your coming out experience?
Yeah of course. Coming out for me – I don’t love the idea of coming out. I don’t think queer people should feel uncomfortable having to feel the need. For me, it was kind of like, ‘This is who I am’. I was young, I was 16, I had always been pretty out there and flamboyant and I think a lot of people around me already knew. I remember feeling that feeling of still being worried because there’s such a pressure that there’s something wrong with you, especially at 16. Coming out, there’s this sense that there’s something not the same as everybody else, and I was one of very few gay people in my high school. The whole thing was really uncomfortable for me, but in saying that, after finishing high school – because I think high school is a world in its own – I really have thrived. It’s never been something that I thought about since, like feeling uncomfortable ever again. There’s been certain situations, obviously, where you’re discriminated against, but in terms of my daily life, that’s just how I live it. I hope that’s what my video depicted. I never thought that anyone should feel the need to have to come out, they should live as they are and that goes to any person in the LGBTQ community. People should just be conscious enough to pick it up.

Australia just passed marriage equality last year. Did it shock you how much homophobia came out around the debate of gay marriage?
Because it was a legal debate, posters that said ‘hang the fags’ went up throughout Australia, specifically Melbourne city. The whole thing was vile. I’m incredibly outspoken about it. Our government gave homophobes a platform to hate, and it was a really terrible time for a lot of queer people throughout Australia. And I think in 2017, that should have never been possible. I don’t think anyone has ever been held accountable for that. We’re lucky that we got a yes vote, but the government has never really been held accountable for what they did, and it was because they didn’t wanna lose power. They didn’t wanna lose their supporters, so they put it up to the public because they didn’t wanna make the decision.

Has the homophobia died down since the debate, or are there still quite a lot of opposers?
It has died down because I think it was clear that the large majority voted against those homophobes and their opinions. But I still think that happening in 2017, it’s mind boggling, just how that happened. It’s so crazy. I live in a really progressive part of Australia, and I kind of have the opinion that if you don’t agree with gay marriage, that’s fine. That’s your opinion. I’m not gonna have an argument about it, but I wanna understand the opposition’s side without being called a faggot or some foul name. I spoke to a lot of conservative couples about it, just who I knew, and they basically said the sanctity of marriage is between a man and a woman. That’s all they knew. I don’t agree with it, but I understand it that it’s been engrained in societies point of view for so long. It’s one of those things where if you wanna change something, ‘But why? It works?’ It’s like, ‘Well, not for everyone. It works for you because you’re privileged and straight’. But it was very interesting because it made a lot of people look outside of their bubbles, especially straight people, and made them realise that they were hindering people of human rights. I also think that some people didn’t change their mind, but they’re less vocal now because they realise a lot of people are against their opinions. I still get called a faggot on social media and stuff, and it really doesn’t phase me. I think it’s disgusting, but someone like me, I’m just like, ‘Okay, God bless you’.