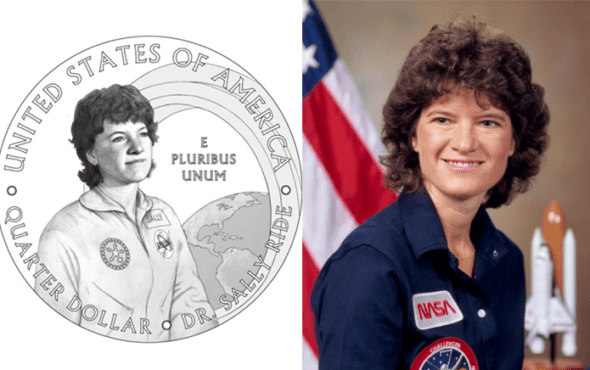 The groundbreaking astronaut will be one of five American women to appear in the new “American Women Quarters Program”.

American astronaut, Sally Ride was a trailblazing scientific figure mostly commonly known as becoming the first American woman in space. Now, the legacy of the prolific physicist will be honoured as she appears on a quarter.

The Sally Ride Quarter is the second coin to feature in the American Women Quarters Program.

The reverse (tails) of the coin will feature Sally Ride next to a window on the space shuttle, inspired by her quote: “But when I wasn’t working, I was usually at a window looking down at Earth.”

The inscription “E PLURIBUS UNUM” is intentionally positioned over the Earth next to America, indicating that out of all women in the United States, Ride was the first into space.

Otero-Warren, a Hispanic politician from New Mexico was married to Rawson D. Warren before separating in 1910.

According to LGBTQ+ nation, she had a lifelong relationship with another woman. It is believed the women lived in separate homes, on the same homestead, and were known as “Los Dos” (The pair). Otero-Warren was not publicly out in her lifetime.

In a similar sense, Ride’s sexuality was not commonly known until her death. Her obituary revealed she was survived by her female partner of 27 years  Tam O’Shaughnessy, a psychology professor at San Diego State University. Ride died of pancreatic cancer, aged 61, in 2012.

#TDIH in 1984: Space Shuttle Challenger launched on STS-41G with Sally Ride and Kathy Sullivan on board. The mission marked the first spaceflight in history with two women on the crew. #BecauseOfHerStory pic.twitter.com/JwOz5xTRMQ

According to US Mint, Ride and O’Shaughnessy were dedicated to narrowing the gender gap in science and engineering careers.

Together, they started an education company to inspire young people, especially girls, in science, technology, engineering, and math (STEM).

In 2001, they joined like-minded friends with expertise in physics, administration, and technology to found Sally Ride Science.

Ride was awarded a posthumous Presidential Medal of Freedom by President Barack Obama in 2013.

You can read more about the American Women Quarters Program here.