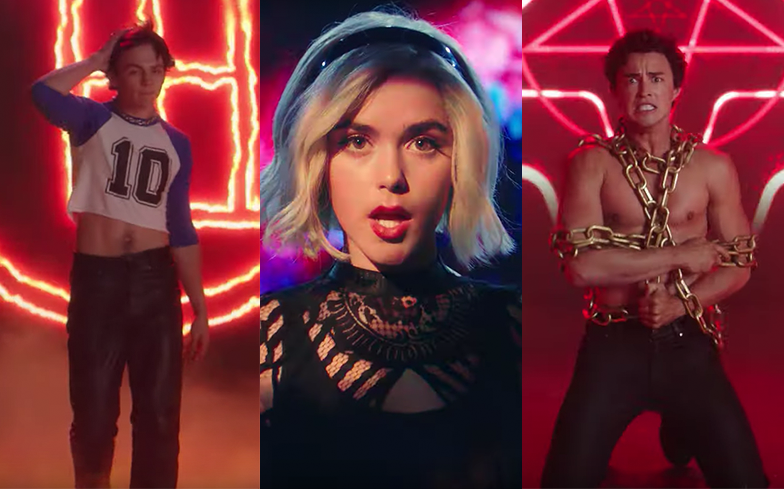 The Chilling Adventures of Sabrina the International Pop Sensation.

Kiernan Shipka has launched her bid for pop superstardom with the promotional music video for Sabrina season 3.

The star, who plays the title character on the fantasy teen drama, embraces her inner Britney slash Marilyn Manson as she performs the witchy new pop anthem, Straight to Hell (now available on iTunes and streaming services).

She provides vocals and choreo as her co-stars, Chance Perdomo, Ross Lynch, Tati Gabrielle and Gavin Leatherwood serve face. The music video is interspersed with scenes from the third season, which will premiere 24 January on Netflix.

The season comes less than a year after the second instalment, which received universal critical acclaim for its dark tone and treatment of its LGBTQ characters – especially Sabrina’s trans male friend Theo Putnam (Lachlan Watson).

Last year, showrunner Roberto Aguirre-Sacasa recently shared a behind-the-scenes photo from the set of the upcoming season of a mysterious woman in a black cloak alongside the caption: “The dread banshee has arrived, but which Spellman will die?”

The banshee comes from Irish mythology, and is a female spirit who heralds the death of a family member by screaming her lungs out – Alyssa Milano memorably played one in the third season of Charmed. But a dread banshee? Who knows?

There’s four major Spellman’s in the series: Sabrina, Hilda, Zelda and Ambrose – is the show seriously about to chop one of them off? Obviously, it won’t be Sabrina, so it looks like it will be one of her aunts or her cousin…

Watch the music video for Straight to Hell below.