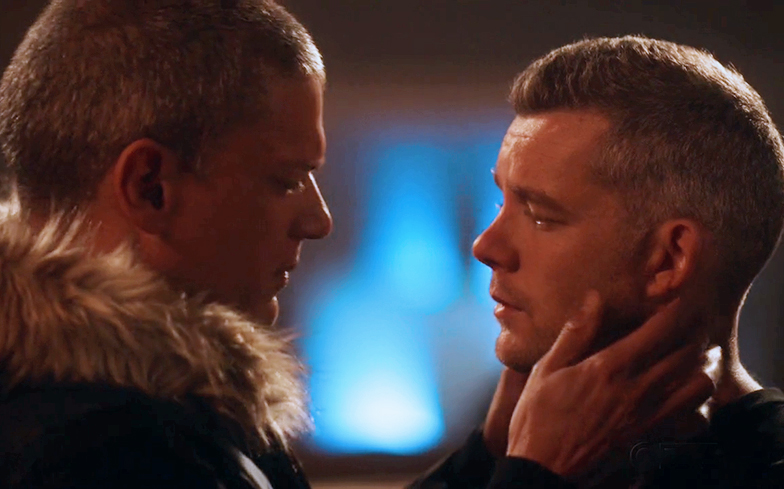 Russell Tovey, star of Looking and The Pass, mad his debut in the DC Universe this week as The Ray, a superhero with the ability to manipulate light who dwells on an alternate Earth where Nazis won World War II.

Oh, and he also happens to be openly gay, which is cool. Tovey’s appearance as The Ray came as part of Crisis On Earth-X, a crossover series about an alternate Earth where Nazis won World War II, which spanned The CW’s four DC Universe TV shows – Arrow, The Flash, Supergirl and Legends Of Tomorrow.

In part three of the four-part crossover – which took place during an episode of The Flash – Tovey’s character The Ray shared a cute kiss with his partner, Wentworth Miller’s superhero Citizen Cold.

See the moment in all its glory below.

The scene was especially significant as not only was it a kiss between two gay superheroes on a popular primetime TV show, the characters are also both played by openly gay actors.

Needless to say, reaction from fans on social media was overwhelmingly positive.

Russell Tovey and Wentworth Miller kissed on the Flash. That’s 2 of my gay idols 😍 even if it was a short smooch.

Check out screengrabs of the moment below. Tovey will also be voicing The Ray in his own standalone animated series, called Freedom Fighters: The Ray, which will premiere online on The CW Seed and is executive produced by Arrow’s openly gay co-creator Greg Berlanti.

The Ray is certainly not the first gay character to appear on DC’s TV shows, as he joins Sara Lance on Legend Of Tomorrow, Alex Danvers on Supergirl, and Central City PD Captain David Singh on The Flash.

Watch a trailer for Crisis On Earth-X below.