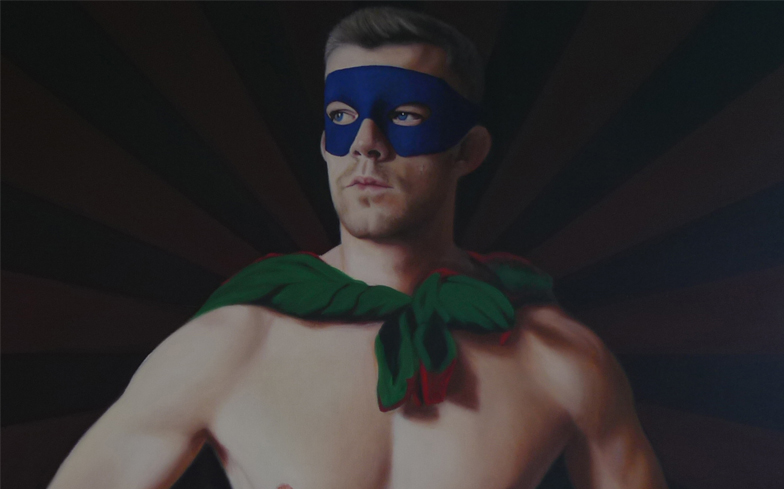 White Y-fronts, a bed sheet and a mask…

That’s what was in artist Christopher Garrington’s bag when he showed up to paint actor Russell Tovey at his East London loft.

With his partner Steve Brockman in the kitchen and their French bulldog Rocky running around, Tovey popped on the pants, tied the sheet round his neck and – with the mask added – became a homemade superhero.

“I wanted to paint Russell as he’s a big supporter of Terrence Higgins Trust,” explains Garrington. “I actually reached out to him through social media. He came back quickly and was really enthusiastic. I wanted to paint someone who had passion for this important cause and he was top of that list.”

The painter’s inspiration for the piece, which is titled Homemade Superhero, came from Tovey’s most recent role as gay superhero The Ray. In fact, in a recent interview with the New York Times, Tovey said: “Growing up, I always wanted to be a superhero.”

“The superhero concept felt right. I knew I wanted to do something sexy and this felt in keeping with his character,” says Garrington.

“I decided to strip him down to his pants and use a bedsheet cape to show you don’t need ‘superpowers’ to become a homemade superhero. Russell’s openness and success shows everyone growing up that can their dreams are achievable.

“I ran the concept by Russell and he really liked it. On the day, I was nervous but Russell and Steve made me feel really comfortable and he threw himself into the character! Usually people sit for hours while I paint them, but that wasn’t an option for Russell, who was just back from America.”

Garrington took a series of photos to paint from and, over the last two and a bit months, has worked on the piece which will be one of the stars of Terrence Higgins Trust’s charity auction at Christie’s world-famous auction house on 16 April.

A photographer from Gideon Mendel’s The Ward series, which is also going under the hammer at Terrence Higgins Trust’s auction on 16 April

Tovey is a long-time supporter of Terrence Higgins Trust. Last year he donated two tickets to the sold out run of Angels in America, which he was starring in as repressed Joe Pitt, followed by a behind the scenes tour. It raised an incredible £5,500 to support the charity’s work. Image: A photographer from Gideon Mendel’s The Ward series, which is also going under the hammer at Terrence Higgins Trust’s auction on 16 April

“I always want to do my bit for Terrence Higgins Trust and this was a completely different way to do it,” says Tovey. “I absolutely love Chris’s concept. He’s a very talented artist. All that’s left is for it to find a good home and raise lots and lots of cash to make sure Terrence Higgins Trust can keep supporting people living with HIV.”

Garrington came to painting later in life and, just a few years ago, he wouldn’t have believed he would ever be painting a famous actor dressed as a superhero.

“There was an incident while I was living and working in the middle east during the Arab Spring. Free to shop for food after a few days under curfew I found myself at the end of an automatic rifle at a checkpoint accused of taking a video on my phone. I was there, hands in the air, thinking ‘what am I doing here?’” he says.

“Within two months I had moved to Italy to see if I was ‘still good at art’.  I booked a month’s life drawing class in Florence and ended up staying two years and now it’s my career.”

And he’s thankful that, as a painter, he can give back to a cause so close to his heart.

“As a gay man, I’ve been personally impacted by the HIV epidemic. I have friends who are living with HIV. It’s a cause that is still so important. Plus, as an artist, the charity’s annual auction fits my brief and allows me to give back the best way I know how – with a painting,” he adds.

The Russell Tovey painting will go under the hammer at Terrence Higgins Trust’s annual auction at Christie’s on Monday 16 April. Tickets are available via the charity’s website.