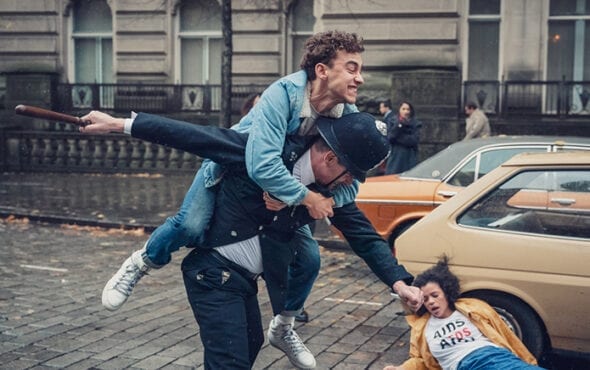 Russell T Davies’ highly-anticipated five-part drama series will chronicle the AIDS crisis through the 1980s, and will premiere on Channel 4 in 2021.

The British drama was originally announced under the working title Boys, but has been renamed to It’s A Sin ahead of its launch next year.

Years & Years frontman Olly Alexander leads the cast, which follows a group of friends who begin a new life in London in the 80s only to find themselves growing up in the shadow of the HIV/AIDS epidemic.

“I lived through those times, and it’s taken me decades to build up to this,” says Russell T Davies. “And as time marches on, there’s a danger the story will be forgotten. So it’s an honour to write this for the ones we lost, and the ones who survived.”

Olly Alexander says: “I feel like the luckiest boy in the world to be a part of this project, I’ve been a fan of Russell T Davies ever since I watched Queer As Folk in secret at 14 years old. His work helped shape my identity as a gay person so I’m absolutely over the moon we’ll be working together. The script was amazing to read, I laughed and I cried a lot, it’s a privilege to be helping to tell this story and I’m so excited.”

Neil Patrick Harris says: “I’m so pleased, and incredibly proud, to be a part of Russel T Davies’ new series. This drama is two things: it is an irresistible, funny, jubilant story of young people discovering their true identities and the unalloyed joy of living life to the fullest, it is also a deeply resonant exploration of a decade when so many of these lives were cut short by the devastating effects of the nascent AIDS pandemic.

“Russell’s scripts chart the highs and lows of this time so beautifully and deftly, it’s an honour to help tell this story.”

An official synopsis for the show reads: It’s 1981, the start of a new decade and Ritchie, Roscoe and Colin begin a new life in London. Strangers at first, these young gay lads, and their best friend Jill, find themselves thrown together, and soon share each other’s adventures. But a new virus is on the rise, and soon their lives will be tested in ways they never imagined. As the decade passes, and they grow up in the shadow of AIDS, they’re determined to live and love more fiercely than ever.

You can watch a first look of the show below: