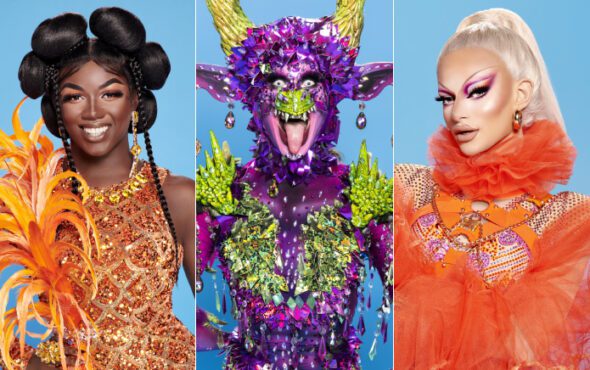 It’s only been six months since Lawrence Chaney conquered over Bimini Bon Boulash and Tayce, the United Kingdolls bing, bang, bong’d the charts and RuPaul tore Joe Black to shreds over her H&M frock, yet it’s time for another round of British C.U.N.T.

In September, 12 more fierce entertainers from across the nation will compete week-after-week in various bonkers maxi-challenges, stomp the runway in high-fashion ensembles and thrown down in lip-sync smackdowns to earn the coveted title of the UK’s Next Drag Superstar.

Like the past two critically-acclaimed seasons, which have been streamed over 35 million times on BBC iPlayer, the third season of Drag Race UK will see the return of Emmy Award winner RuPaul and Seduction songstress Michelle Visage, as well as rotating panellists Alan Carr and Graham Norton.

Fiona Campbell, BBC Three Controller, said in a previous statement: “It’s been a huge hit for us and we love it as much as you do so we’re delighted that we can continue our relationship with World of Wonder and can bring even more Drag Race to BBC Three.”

Enough of the chitter chatter, eh? Get your jush with the cast of RuPaul’s Drag Race UK season three below… Hailing from Brighton, Anubis describes her style of drag as “campy and wacky, silly and rather fun”. The 19-year-old, who is partial to a gymnastics-heavy routine with a bit of jazz and musical theatre thrown in for extra measure, boasts a four octave range (!!!!) and experience providing backing vocals for “big” stars. Her name stems from her Egyptian heritage and is a tribute to her father, who passed away three years ago. When asked why she should be the UK’s Next Drag Race Superstar, Anubis responds: “Well, not to brag or anything, but I do have quite a wide skill set. I’ve got the vocals, I got the dance moves, I got the comedy… so I really think I’m a bit of a threat!” “My drag is not entry level,” says Charity Kase. “At a Charity Kase show, you can expect shock, horror, gore,  glamour and maybe a little bit of vomit! You have never seen anything like me.” The Lancashire-born entertainer has been a staple in the UK drag scene for years due to her aforementioned focus on providing the spook, and has garnered a reputation for her “outlandish” aesthetic. Charity says her name originates from her ability to “craft stuff on a very low budget and transform the grotesque to glamourous,” while being both at the same time. As a queen who knows her way around a sewing machine, Charity is most looking forward to concocting a garment and showcasing her craftiness. “I am pushing the boundaries of drag and I’m opening people’s eyes up to a whole new art-form of transformation. I am scary, hairy and a total fairy!” Originally from Spain, Choriza May describes herself as Newcastle’s “spiciest, meatiest and silliest sausage”. Sign us up! The 30-year-old is known for incorporating “puppets, live singing, a bit of dancing, projection, spoke word and lip-syncing” in her live performances (no biggie), and is an experienced graphic designer and illustrator, so you can expect her to slay the artistic-leaning challenges. “As an immigrant queen, I’m someone with a slightly different background to the other queens in the competition, but my drag was born in the UK,” she states. “There are millions of European immigrants in the UK and I’m so happy to be representing them as drag queen of the immigrants!” The second ‘Elektra’ to make a splash on RuPaul’s Drag Race this year after Down Under’s Elektra Shock, this 29-year-old Lancashire-born performer is revered for her relentless dance moves. (We’re already looking forward to the lip-syncs!) Inspired by “Northern warrior women” such as Bet Lynch and Jane McDonald, Elektra says her live shows are renowned for her various stunts, such as “dropping from the sky down into the splits, bouncing into a headstand, spinning around, leaping onto the bar and leaping off into into the splits”. Although she chose her drag name to reflect her “death defying and electrifying” nature, it was actually birthed from a viral video of the star in which she “accidentally” electrocuted on an electric fence. Loves it. “I’m the drag beast from the East. I’m like a desperate housewife of Dagenham,” reveals Ella Vaday. “A yummy mummy – a bit garish, a bit classy, a bit Essex-y. I’m very sarcastic and dry.” A singing and dancing queen, the 32-year-old entertainer from Dagenham has only been Ella Vaday for the past two years – but don’t even try to count her out. Ella’s credits on stage include Peter Pan, Fame, Wicked, Book of Mormon and Joseph and the Amazing Technicolour Dreamcoat. What a CV! On the show, Ella says she’s “bringing all the skills” she’s accumulated over the past 14 years and is determined to conquer the singing and dancing challenges. She adds: “This competition is testing everything I’ve ever learned. I don’t do things by halves.” In the word(s) of Adore Delano, “Meow.” The (hey!) Kitty Girl (it’s your world!) has arrived! Kitty Scott-Claus, Brummy, calls herself the “future of British drag” due to her combination of camp, old school drag and “modern” sensibilities. Her strengths lie in her hilarious personality and musical theatre background, while – wait for it – sewing is her weakness. (They never learn, huh?) If you recognise Kitty, it’ll be as a member in Gals Aloud, the Girls Aloud-tribute band that features season one alum Cheryl Hole. “That first gig was a hot mess,” she ruveals. “I looked an absolute mess, but I literally thought I was God’s gift, but now here we are four years later and I’m on RuPaul’s Drag Race UK!” One of the youngest queens in the mix, 19-year-old Krystal Versace is Drag Race UK season three’s self-described “sex goddess”. The star oozes (hi Soju!) confidence as she says of her aesthetic: “She is the supreme. She is a god. It’s the legs, the body, the hips, the waist. High feminine glam. Super fierce. She is just the ultimate moment.” Krystal, who has been practicing drag for two years, will be another contestant to watch in the lip-sync smackdowns; the queen is often compared to a “flying squirrel” on the stage due to her numerous kicks, flips, splits and other tricks. “My drag is refined and polished,” she says. “I’m the full package.” “I can’t bear a dirty wig,” admits River Medway. “It makes me really angry!” The Hannah Montana buff from Kent says she became a drag queen because, like Miley Cyrus’ Disney Channel counterpart, she’s obsessed with the transformation of it all. “By day she was a schoolgirl, living a completely normal life, and then by night she’s a popstar with wigs, makeup and outfits,” she explains. “That’s drag!” Like Hannah, River is a live vocalist with an affinity for musical theatre and building connections with her audience. The challenge she’s aiming to conquer is one of Drag Race’s staples, the all-singing, all-dancing Rusical, stating: “That’s really my thing. I’m really competitive – I am in it to win it. I want to strut on that runway and show everyone what I can do.” Although Scarlett Harlett boasts a movie star name and aesthetic, her personality is – in her words – “proper mouthy, cheeky cockney, like Danny Dyer in drag”. What a combo! The 26-year-old East London native has been a drag entertainer for eight years and aims to celebrate her working class background and signature East End sense-of-humour within her act. Despite her fierce promo, Scarlett insists that she’s not a fashion queen because she has “absolutely no style” and can’t dance to “save my life”. Ultimately, she just wants to make people laugh. “I don’t things too seriously, so I wonder how people are going to take it,” she says, before adding: “I have come from nothing. I grew up on a council estate and I feel so proud to have landed myself in one of the biggest shows in the UK right now. I want people to know you can make a banquet out of scraps.” Born and bred in Mitcham, South London, Vanity Milan is the Powerpuff Girl of Drag Race UK season three with her recipe of “sugar, spice and everything nice.” (THESE ARE THE INGREDIENTS CHOSEN TO CREATE TH-) The 29-year-old insists that she’s not – and we’re looking at you, Cheryl Hole, as we type this – a “diva or a hun”, she’s a “sophisticated, sexy and savage” queen serving “unapologetic Blackness”. Although she’s only practiced drag for a year, she claims to have gone from “0 to 100 real quick” due to her competitive nature. Vanity says: “I believe if you put your mind to it, and you put the blood, sweat and tears and the hard work and dedication behind it, you can be somebody! But that doesn’t mean you have to take other people down to get there.” Can we get a mothertucking amen up in here? Because Veronica Green, RuPaul’s Drag Race UK season two Rusical champion, is back for another round! Due to COVID’s rude interruption halfway through the aforementioned season, Veronica was forced to depart the series – Eureka-style – and was blessed with an open invitation for season three, and trust us when we say she’s come back with a vengeance. “Am I going to win?! Does the pope shit in the woods?” the triple-threat entertainer eloguently states. “I was supposed to win Drag Race UK season two. And if you don’t crown me this time Ru, I’m going to come back again.” With prior experience filming the series and one badge to her name already, Veronica will be one to watch this season. This season of RuPaul’s Drag Race marks a landmark moment for the Emmy Award-winning franchise with the inclusion of Victoria Scone, the series’ first ever cis-gender female contestant. “I am not the first and I certainly won’t be the last,” says the Cardiff queen, who prefers to label herself as a “drag queen, drag artist and extraordinaire” over the term AFAB (Assigned Female at Birth). “But I feel very capable and proud to have made it through the application process and be the first on Drag Race UK. Me being here is political, but you can just have fun with it.” When it comes to her style of drag, Victoria is a camp, cabaret disco diva with “a lot of spunk” who aims to represent marginalised minorities “in the queer scene to see themselves reflected” on television. “I wanted to do Drag Race to prove that I can win it,” she continues. “I’m not a fragile, little flower darling. I can have them all for supper!”