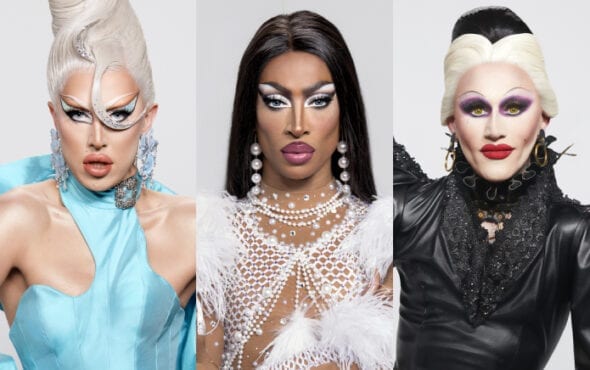 Here’s everything you need to know about the cast of RuPaul’s Drag Race UK season 2.

Yep, the time has finally come for us to announce: the cast of RuPaul’s Drag Race UK season two are – in the words of Jasmine Masters – here, H-E-R-E, here!

BBC and World of Wonder have unveiled the 12 fierce competitors that will sashay into the werkroom for the long-(we repeat, long)–awaited sophomore season, which was put on hold in March due to COVID.

Just like its debut, which saw The Vivienne triumph as the UK’s First Drag Superstar, the season will include a diverse array of entertainters – expect comedy, glam, old school drag and even some horror.

Season two, which will run for ten weeks, will see the return of RuPaul, Michelle Visage, Graham Norton and Alan Carr, with Alan and Graham joining the panel on a rotational basis.

Only two have been confirmed so far: Vicar of Dibley icon Dawn French and infamous gamer Gemma Collins, who will follow in the footsteps of Lorraine Kelly and Stacey Dooley on Snatch Game.

Not only that, the queens will star in RuPaul’s Drag Race UK: Queens on Lockdown, a special episode which uncovers how the contestants spent their time during the first lockdown.

There’s no official date for the special just yet, but it has been confirmed to air mid-series and scheduled in the near future.

Enough of the chitter chatter, eh? Get your jush with the cast of RuPaul’s Drag Race UK season 2 below. Hailing from Worksop, A’Whora describes herself as a fashion queen who will never be seen in a “High Street dress”. NEVER! Growing up, the 23-year-old was inspired by Cruella De Ville and – on a more surprising note – The Child Catcher from Chitty Chitty Bang Bang, explaining: “I love the idea of being sinister, I want to walk into the room with presence.” Although she’s not intimidated at the thought of competing on Drag Race, she admits her weaknesses lie in challenges that are dance and comedy based. However, she adds: “I am fully rounded. I’m very creative, I can act, and I am a seamstress extraordinaire.” “I am a strong physical, fit, masculine, feminine woman,” says Asttina Mandella. “I am Serena Williams and Naomi Campbell if they had a baby, plus Azealia Banks! I’m a body queen. I am blessed, gorgeous and stunning.” Yep, we’re on board. The East London-based queen is a dancah, having performed for legendary artists such as Little Mix, Kanye West, Pussycat Dolls, Melanie C and Sophie Ellis-Bextor. She’s trained in ballet, tap, contemporary, Latin, hip-hop, funk and street, so expect some major lip-sync showdowns from Asttina. East London’s “bendiest queen” only started drag 18 months ago, but don’t count her out. Bimini is a dancing comedy queen (we’re sold already) who can do the Russian cancan in a “pair of massive heels” and slay an oat milk-covered performance with a “strong vegan message behind it”. The self-described “non-binary creature of the night” is primarily inspired by Pamela Anderson and Vivienne Westwood, and sees the art-form as a “shield” that infuses her with “sass”. Fun fact: she also has a degree in journalism. Drag Race UK’s resident club kid is here. Cherry Valentine says her drag is “glamour, dark, gothic and high fashion,” and describes her stage presence as “flippy”. Like Bimini, Cherry hasn’t been shantaying from club to club as long as the other girls, with less than a year’s experience to her name. She reveals: “I’ve worked hard at my drag, and I’m really proud of myself for throwing everything into the application process and  making it through to this amazing platform.” Cherry is also a qualified mental health nurse, and believes this has assisted with her drag journey – and vice versa. “I understand both myself and other people a lot more now.” Our first Scottish queen! Born and raised in Dundee, Ellie Diamond says RuPaul and his Emmy Award-winning franchise are responsible for her foray into drag. “I like the biggest wigs, heels, outfits, lashes, makeup and ass,” she states. “I would describe my drag as a cartoon character that has come to life.” When it comes to the challenges, Ellie is concerned about Snatch Game but is sure she’ll slay anything singing and acting-related. She admits to being competitive, but won’t throw her sisters under the bus because her motto is “treat others the way you want to be treated and maybe then the world can be rainbows and unicorns.” Like season one finalist Baga Chipz, Ginny Lemon prioritises performance over make-up. She calls herself a “drag troll” and the “only non-binary queen in the UK with a sense of humour”. If you recognise Ginny, then it’s most likely from her 2017 stint on The X Factor, where she performed Liberty X’s dance-pop classic Just a Little Bit. That’s right, we’ve got our first vocalist of the season! “I’m a fabulous singer and I can do everything,” she humbly explains. “And, an absolute bullshitter as well.” Herstory will made yet again with Joe Black, who becomes the first queen to hail from Brighton, the LGBTQ+ capital of the UK. Although she acknowledges her drag as “harsh” and “strange” on first glance, Joe enjoys a good ballad – Marlena, not Minogue. When asked what fans can expect from a Joe Black show, the star responds: “Imagine you’ve found yourself in some seedy 1920s Berlin cabaret joint where we will have a dark, delicious and deviant time. I bring all the wonky eyebrows and eyeshadow of the traditional seaside drag with a bit of haunted glamour.” Two Scottish queens on the same season? Can we get a halleloo?! Lawrence Chaney says she’s “every single stereotype that you are thinking right now about a Scottish person” and is a big fan of Irn-Bru, as well as a caramel wafer. As a creative child, Lawrence says she didn’t find anything that encompassed all of her passions until she discovered drag. With her appearance on season two, she wants to showcase that a “big diva” can be fierce and wear high-fashion, and not just rely on fat jokes. Lawrence says: “I am so ready for this race. I want to slay every challenge and take home that crown!” There’s always that one underdog, isn’t there? Sister Sister describes herself as such, because although she’s a master of dry comedy, she can turnt it out in the make-up department and serve some moves if it comes to it. “I can dance, not well, but I can dance!” she explains. “I have personality in abundance and that’s one way to keep the cameras on you at all times.” Despite this, she reveals her irrational phobia of Farrah Moan-ing it on the main stage: “I am so unsteady on my feet. It’s a constant fear. I just don’t want to make a tit of myself in front of the other queens. I want to turn up like a warrior.” We have another dancing diva! London-based entertainer Tayce, originally from Wales, likes to channel “powerful femme fatales and divas” with her drag, such as Beyoncé, Ciara and Jennifer Lopez. “They made me feel powerful and now, I love to give the power back to people when I’m on stage,” she reveals. No, Tayce isn’t worried about the competition aspect, but also yes, because of – yep, you guessed it – Snatch Game, and the fact that she’s never touched a sewing machine. But will that stop her? Nah. “I am doing this for Wales, for my parents and my family,” she continues. “I’m doing it for all those little buggers who have looked at me and thought I was an absolute freak. I’m doing it for myself. I’m doing it for Gavin and Stacey!” Tia Kofi promises to provide viewers with more quintessential British references and humour, as well as paying tribute to her Nigerian heritage and passion for sci-fi classics such as Doctor Who and Star Trek. Originally from Essex, Tia says she’s now the “queen of Clapham” and was raised by older queens, so her aim is to keep the spirit of “old school drag alive” with live vocals, dancing, glamour and camp. But, she’s not competitive. “I’m quite shy and retiring in real life, and so I’m worried about the other queens,” she admits. “I can’t be dealing with fierce queens. They’re so glamorous and they scare me. I hate confrontation. If I get any of that I will cry. I’m a child!” “I am the most competitive person I know,” says Veronica Green, the anti-Tia Kofi. “This isn’t a social experiment for me, this is a competition and I’m in it to win it! In my social life I may be a bit of a wallflower, but in competition, I aim to be the best at everything I do!” From Rochdale, Lancashire – the home of Lisa Stanfield – the star moved to London to develop her drag persona, which is heavily inspired by supervillains and femme fatales. When it comes to the stage, Veronica is a skilled singer, teasing some operatic-esque vocals during her Drag Race run. Despite the confidence that oozes (hello Soju) from the aforementioned quotes, Veronica says she’s different from her drag counterpart. “I can be very socially awkward, always muddle up my words,” she says, before adding: “I cope well in high pressure environments. Get the job done! That’s my motto for life.”

Check out the sickening cast photo for RuPaul’s Drag Race UK season 2, which premieres 14 January on the BBC, below. UK season two will coincide with the release of Drag Race season 13, which was recently confirmed to premiere 1 January in the United States on VH1. Read the bios for each contestant here.

The season will make major strides towards more authentic representation with the inclusion of former GAY TIMES cover star Gottmik, who makes history as the first ever trans male contestant.

The sixth season of All Stars has also been confirmed to air in 2021 (here are the rumoured contestants) and, following the monumental success of Canada’s Drag Race and Drag Race Holland, we can presume that sophomore seasons are in the works for both.

It’s also been confirmed that the franchise will head to Spain for its next international spin-off. C’mon world domination!