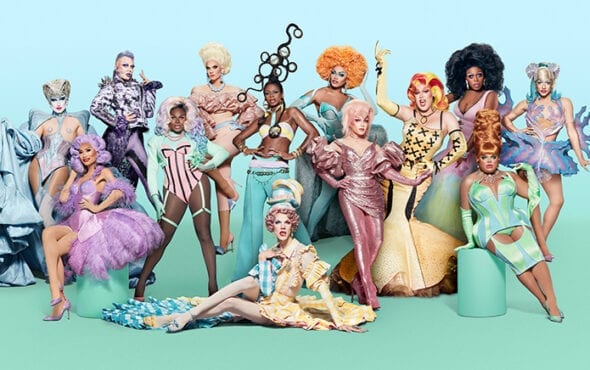 RuPaul’s Drag Race is coming to save us from our impending doom, OFFICIALLY.

It’s only been six months since Crystal Methyd regurgitated the life cycle of a bird, Gigi Goode left us slain with a virtual performance of Take on Me and Jaida Essence Hall sashayed away with her crown and sceptre, yet it’s time for another round. And, we couldn’t be more excited.

Today, World of Wonder announced the sickening competitors that will stomp down the runway for the 13th season of RuPaul’s Drag Race, and in the words of GAY TIMES cover star Shea Couleé, they didn’t come to play, like, at all.

The show is also making major strides towards more authentic representation this year with Gottmik, who makes history as the first ever trans male contestant.

The season, which is presumed to air once more in the UK on Netflix, has been confirmed to premiere New Year’s Day in the United States on VH1.

“Competing safely and fiercely, our 13 queens proved that it takes more than a global pandemic to keep a good queen down,” RuPaul in a statement.

Get your jush with the official cast of RuPaul’s Drag Race season 13 below. “All hail Chicago’s ice queen. With a career as a professional figure skater, much of Denali’s unique drag incorporates ice skating and acrobatic elements. Denali is used to competing, but now at the Olympics of Drag, she is ready to break the ice.” “A dancing queen known for her kicks and splits, this Las Vegas show girl is here to stand out from the crowd. With her 80s aesthetic and background as a professional dancer, Elliott is hoping to dance circles around her competition.”

Take a walk on the wild side with Elliott with 2 Ts! 🐾💎 #DragRace #DragRaceRuveal pic.twitter.com/kLCz0UTiNC “Hiiiiee gorg! This celebrity makeup artist is ready to win the competition one face at a time. As a trans man who is changing the shape of drag, Gottmik is ready to show an edgy persona d’arte.”

Serving face and so much more, it's the out of this world Gottmik! 🖤⚡️ @gottmik #DragRace #DragRaceRuveal pic.twitter.com/FpkTVE4j5O “Don’t underestimate this dancing powerhouse. This celebrated Jewish princess with unmatched rhinestoning skills is ready to cluck and buck all the way to the top.”

If you stay edgy you don't have to GET edgy! 🤘 Introducing Joey Jay! 💎 @joeyjayisgay #DragRace #DragRaceRuveal pic.twitter.com/GelaApAzVP “Chicago’s premiere Mackie Barbie doll is here to define what it means to be dripping in luxury. As the essence of glitz and glamour, Kahmora knows how to turn looks on the runway and serve in style.” “This ‘bad and bougie’ Dominican doll from NYC is ready to take her competition by storm. After going viral on social media and winning Brooklyn Drag Queen of the Year, Kandy is a pro at being in the limelight and brings the whole package to the table.” “LaLa Ri is here to slay. This Atlanta-born powerhouse entertainer is ready to bring her mixture of sexy, classy and sassy to the competition, along with her charming and fun personality.”

Get all up in this gig, girl! 😍 Meet the showstopping LaLa Ri 💄 @MissLaLaRi #DragRace #DragRaceRuveal pic.twitter.com/msjZ1DiNbY “Lux be a lady tonight. As the diva with a heart of gold, Olivia can melt a room with her dazzling smile. With her old Hollywood style and background in musical theater, this piano player is here to shine all the way to the top.” “At the intersection of Wit Avenue and Fashion Blvd., you’ll find New York royalty Rosé. As a member of the girl group Stephanie’s Child alongside Season 12’s Jan, Rosé is ready to sing and dance her way to the finish line.” “The ebony enchantress has arrived! As the first queen hailing from Arkansas, this confident small-town country girl comes to RuPaul’s Drag Race ready to give fashion, face, personality and heart.” “Tamisha Iman is one of the most experienced in the art form of drag. As a mother figure who formed her own dynasty, Tamisha comes to the competition with impressive sewing skills, making all her own one-of-a-kind garments from scratch.”

Here to teach the children how they do it in the ATL, meet Tamisha Iman! 🌈💋 @tamishaiman1 #DragRace #DragRaceRuveal pic.twitter.com/JCpHxglI0K “From being part of a boy band to the RuPaul’s Drag Race stage, Tina Burner is always ready to put on a show. This costume comedy queen and reigning National Miss Comedy Queen 2019 is a NY legend and is here to burn the house down.”

Is it hot in here or is it just NYC's own Tina Burner!? 🔥💋 @thetinaburner #DragRace #DragRaceRuveal pic.twitter.com/XAUckNqD0s “Utica Queen is ready to wiggle her way straight to the crown. Identifying as the wacky, wavy inflatable arm tube queen, Utica is hoping to take the world by storm with her own form of goofy, pop-art drag.”

Check out the official cast photo below.

It's a brand RU year, and these Queens are ready to rise to the runway! 💋👑

Season 13 will be the first of many Drag Race instalments in 2021. The second UK season is rumoured to premiere shortly after, as well as the sixth season of All Stars (check out the rumoured contestants for the latter here).

Following the monumental success of Canada’s Drag Race and Drag Race Holland, we can also presume that sophomore seasons are in the works for both. It’s also been confirmed that the franchise will head to Spain for its next international spin-off.

Watch the teaser trailer for RuPaul’s Drag Race season 13 below.