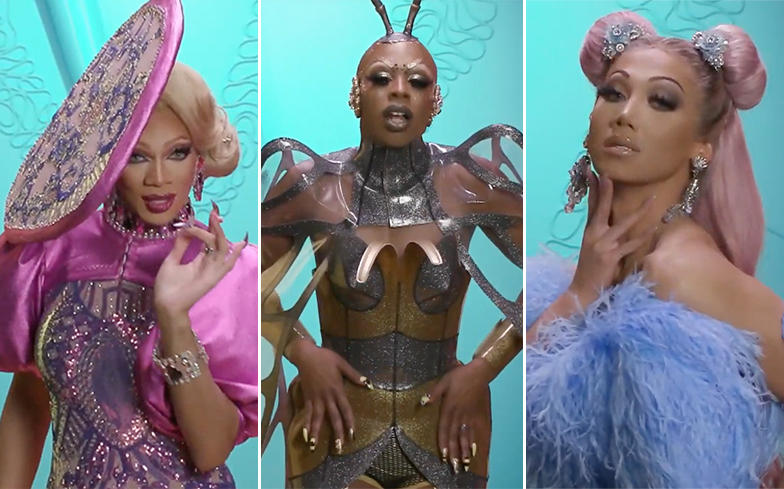 Ladies and gentlemen, it’s time to start your mothertucking engines (again), because VH1 has unveiled the official cast list for the highly-anticipated eleventh season of RuPaul’s Drag Race.

Aquaria and Adam Rippon just revealed which hunties will sashay, shantay and panther on the runway on VH1’s YouTube account, and heeeeeeeennies, we are so ready to gag on all this eleganza! Texan queen A’keria C. Davenport is ready to slay this competition – officially. The performer is the recipient of Miss Black Universe and Miss International Vogue, and boasts Drag Race All Stars 3 runner-up Kennedy Davenport and the late Sahara Davenport as her drag aunts, and fellow contestant Honey as her cousin. She refers to herself as “The Ruler”, so we can’t wait to see what this queen comes up with. Not many queens have a massive online presence before they’re announced for Drag Race. Ariel Versace, however, currently has 120k followers on Instagram and is known by drag fans for her YouTube makeup tutorials and colourful array of wigs. Except some sickening lewks from this New Jersey fish. Brooke Lynn Hytes is the first Canadian queen to appear on RuPaul’s Drag Race – can you believe it’s taken this long? The performer previously won the title of Miss Continental and was a professional ballerina for over ten years, and is a very good squirrel friend of Kameron Michaels, so we’re expecting her to serve in a lip-sync. However, she isn’t proficient in the art of blind darts, so she might struggle. Bless her. Another Davenport! NYC-based performer Honey is the drag mother of Monét X Change, niece of Kennedy and Sahara, cousin of fellow contestant A’Keria, and was also raised by Manila Luzon. She’s a respected performer in the NYC drag scene and is best known for her high-energy lip-syncs and numerous pageant wins. Honey also acted in off-Broadway shows such as The Orion Experience and For The Love of Honey, so we have a feeling she’ll be the one to beat. Fun fact – she used to be a backup dancer for Peppermint.

Like we said above, several of these queens have connections to legendary Drag Race alumni. So far we’ve had family members of Monét, Kennedy, Sahara and now, we have a Montrese! If Kahanna’s lip-sync abilities are anything like her mother Coco’s, she’ll be the assassin of season 11. Yas honey! Mercedes Iman Diamond is the show’s first ever Muslim contestant, and is a force to be reckoned with due to her various pageant wins at Miss Gay 90’s and Miss City of the Lakes, as well as serving as second alternate to Miss Minnesota Continental. Mercedes says she’s going to give us “everything” this season. We are ready honey! Nina West is one of the most well-known drag performers in the United States. Like, hello? She was the first queen Adam Rippon ever saw live. The drag veteran – who finally got on Drag Race with her ninth audition – is an actress, activist and performance artist, and is best known for her old school camp aesthetic, which we’ve not seen much of over the years, so we’re excited to see what she brings to the main stage.

Plastique Tiara is one of the most followed non-Drag Race queens on Instagram, with over 228k followers. The self-described “Asian Barbie” is a member of the Haus of Edwards, and is renowned for her makeup skills and lewks. However, she’s been taken in by Alyssa, so this queen is also a performah! Will she gag us like her mother? No, Ra’jah has no relation to Phi Phi, Eureka or Asia. But… she is another link to the Davenport sisterhood, with fellow season 11 queen A’keria referring to Ra’jah as her “big sis”. Like previous contestants Kennedy, Alyssa and Asia, she’s been crowned Miss Texas FFI, so she has some big boots to fill… Scarlet Envy is a staple in the New York drag scene and found her calling as a queen not long after she graduated from NYC’s Fashion Institute of Technology. She once referred to herself as “the cheapest lady with the highest price tag”, and said she’d rather see “RuPaul’s lashes than a Kardashian’s ass”. Scarlet says she wanted to be on Drag Race to “change the world”. Shuga Cain is known in the drag community for her gag-worthy live performances and eye-popping aesthetic. She is a former triathlete and has won Bob the Drag Queen’s competition, Miss Look Queen, and her drag name comes from her sweet tooth. Oh, and she’s a professional baker, so there’s that too.

Ooh honey, just like her season 11 sisters, Silky Nutmeg Ganache has an impressive amount of titles in her repertoire: Miss Latina Continental Plus, Miss Unlimited Newcomer and Miss Gay Indiana University. We expect her to scoop any music-related challenges because this queen has a degree in music…

This Illinois queen is known for her hit YouTube series, Shot With Soju, which sees the performer interviewing several drag contestants throughout Drag Race HERstory. Another fun fact for you all: She’s a blackbelt in taekwondo.

Known for her avant-garde style of drag, irreverent sense of humour and piercing cackle, Yvie Oddly is a formidable performer in the drag scene. She likes to show audience members “something they may have never seen before”, so if she ever has the chance to lip sync, we’re expecting a show.

Miss Vanjie is back! The legendary contestant was voted off in the first episode of season 10, but she is back, Shangela-style, and she is ready to conquer this mother-tucking competition. Will she make it further than 14th place this time?