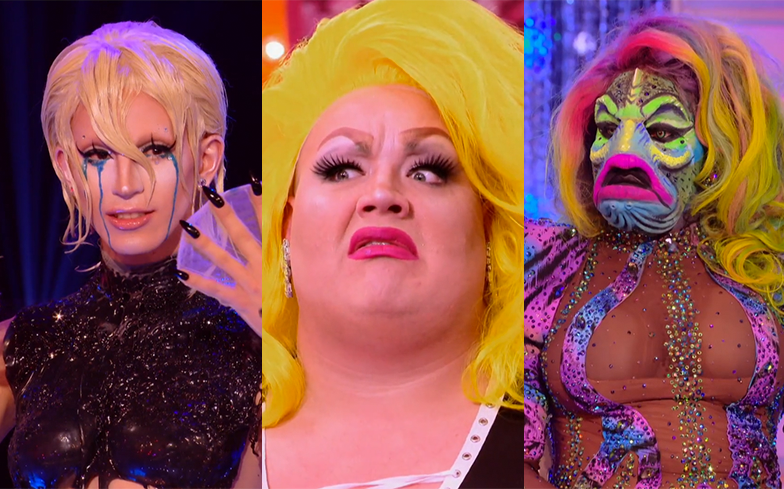 We spill all the T.

Tonight, six straight months of RuPaul’s Drag Race comes to an end. Six. Months. Like, where the hell has time gone?

Since January, we’ve been treated to so many iconic, gag-worthy, groundbreaking, revolutionary moments honey, and we are not exaggerating.

In All Stars 3, season one champion Bebe Zahara Benet made an unprecedented comeback, BenDeLaCreme eliminated herself after winning five challenges, and the finale broke the internet after Trixie Mattel ‘robbed’ Shangela of the crown.

Season ten then blessed us with a guest-appearance from Christina mother-tucking Aguilera, a viral star in Miss Vanjie, another highly controversial elimination, and an awkward, uncomfortable, messy-ass reunion.

Honestly. So much draaaaahmaaaa. Ahead of tonight’s season 10 finale, we’ve rounded up what’s happened so far – for the hunties who need to catch up – including which queens are left and how they’ve performed throughout the competition.

Which queens are still in the running? Aquaria came into the competition with the biggest social reach of any queen, due to her fierce, high-fashion lewks. Described by her fellow contestants as just a “look queen”, the 21-year-old proved them all wrong when she revealed her sharp comedic talent as Melania Trump during Snatch Game. Her portrayal as The First Lady was so iconic, we’ve ranked it at number eight on our list of top Snatch Game performances. Can Aquaria also snatch the crown? This Texas queen has been a formidable competitor on the pageant circuit for over a decade. She’s won the following prestigious titles: Miss Gay USofA 2007 (succeeding Alyssa Edwards); All American Goddess 2012; and Miss Gay America 2016. Has she lived up to her reputation? Yas hunties! She’s conquered two challenges so far, and has provided us with one of the most gag-worthy runways in Drag Race HERstory. After a rocky return to the competition, Eureka O’Hara bounced back and slayed the judges, winning two consecutive challenges. She may have landed in the bottom two twice, but each time, she’s mother-tucking turned it out and proved why she’s worthy of being America’s Next Drag Superstar. Can Eureka go all the way this time, and become the first plus-sized beauty to snatch that title? This 31-year-old Barbie doll bodybuilder from Nashville didn’t make much of an impression on Drag Race audiences before the show aired, but has since been recognised as the “black horse” of season 10. Week by week, Kameron Michaels has slayed the runway and the challenges, and has proven to be one of the fiercest lip-syncers this season. Can she lip-sync her way to that crown?

Who’s been eliminated so far?

Vanessa Vanjie Mateo came into the competition with a pretty impressive repertoire, having already won Miss Polk Gay Pride Newcomer and Miss Southern Nights Newcomer. Despite boasting Drag Race legend Alexis Mateo as her drag mother, she became the first contestant to leave the competition, which wasn’t well received by fans. Her exit from the competition led to the queen becoming a viral sensation, and the most legendary contestant to leave the show in last place (besides Shangela). Hopefully we’ll hear “Miss Vanjie… Miss Vanjie… Miss Vanjie…” before she pops out of a box in season 11.

Self-described as the “wicked stepsister” of the Kardashian family, Kalorie Karbdashian-Williams sashayed into the competition with a whole lot of sass and a whole lot of asssss. She ended up in the bottom two for the first episode, but made a memorable impression on the judges as she twerked for her LIFE to Christina Aguilera’s iconique 2006 single, Ain’t No Other Man. Her performance in the second episode also wasn’t enough to warrant a ‘safe’, and ultimately, Kalorie was sent packin’ by bff, Eureka O’Hara. This NYC queen told fans she was in a coma to hide away the fact she was filming RPDR (our favourite excuse ever). Yuhua’s first two weeks showed promise, but the seamstress floundered during the Tap That App challenge, losing out to Mayhem Miller in a killer lip-sync to Hole’s Celebrity Skin.

Read our interview with Yuhua here. The “dark, glamourous and trashy” Dusty Ray Bottoms touched audiences in week three, when she memorably opened up about her horrific experience with gay conversion therapy. As testament to the LGBTQ mantra ‘It Gets Better,’ Dusty weathered the turbulent period in her life to move on to bigger and better things. Unfortunately, Dusty landed in the bottom two for The Last Ball on Earth, and was sent home by Monét X Change. A prominent figure in the West Hollywood drag scene, Californian queen Mayhem Miller came into the competition with a fierce and revered reputation. Despite winning the first challenge, Mayhem fell into the bottom during the third week, and showcased her extraordinary lip-sync skills to Hole’s Celebrity Skin. Her performance in the competition continued to dwindle, and unfortunately, Mayhem was sent home by Monét X Change in the fifth week.

Read our interview with Mayhem here. Blair St. Clair made headlines before she even entered Drag Race for violating her – wait for it – parole. Can you believe? The 22-year-old queen received a DUI back in 2017, and was supposed to stay in Indiana. We were so convinced at one point that the FBI would enter the main stage and arrest Blair in a Willam/Eureka shock style eviction. What a missed opportunity, eh? During the sixth week, Blair received universal praise from fans for opening up a discussion about sexual assault. In the same week, she fell into the bottom two and was sent home by close friend, The Vixen.

Red out interview with Blair here. Monique Heart was this season’s supreme confessional queen. Self described as the “heart of season 10”, Monique came into the competition and gave us all the “ooh ah ah sensation” we never thought we needed honey. Despite being deemed a frontrunner by fans, Monique was sent packin’ after a terrible Snatch Game performance as Maxine Waters and an unforgivable lip-sync to Carly Rae Jepsen.

Chicago queen The Vixen came into the competition and proclaimed to her fellow queens, “I’m ready to fight”. Did she live up to her promise? You can say that… Throughout the series, The Vixen often clashed with Aquaria and Eureka O’Hara, and provided us with some of the most entertainting episodes of Untucked. In week eight, The Vixen was sent home by her sister Asia O’Hara, after floundering in Cher: The Rusical. Monét X Change became a force to be reckoned with in weeks four and five, when she displayed her fierce lip-sync skills against Dusty Ray Bottoms and Mayhem Miller. After that, the NYC queen came close to winning the next four challenges, but never quite triumphed over her competitors. In week ten, Monét was harshly critiqued by the judges for her makeover of social media personality, Tyler Oakley, and lip-synced for the third time against Kameron Michaels. Unfortunately, Monét’s performance wasn’t enough to secure her a place in the top five, and she was told to sashay away. What a lip-sync though, right?

Read our interview with Monét here. Despite placing high throughout the competition, Miz Cracker didn’t win her first challenge until the tenth episode, when she introduced the Drag Race fandom to her iconic drag daughter, Miz Cookie. One week after, Cracker fell into the bottom two for the first time, and performed against lip-sync assassin, Kameron Michaels. She may have lost the crown, but honey, she arguably won the coveted title of ‘fan-favourite’. Like Trinity Taylor said in last year’s finale, “that’s the true winner”.

The season 10 finale of RuPaul’s Drag Race airs tonight at 8pm on VH1.