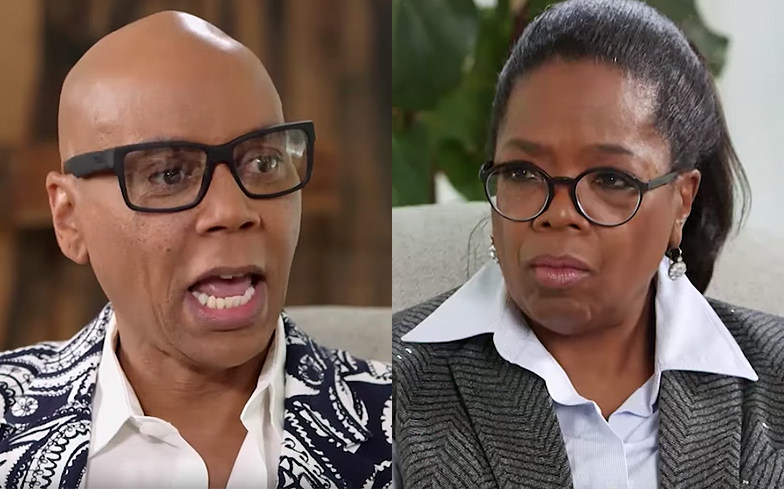 Ahead of the premiere of RuPaul’s Drag Race All Stars season three later this month, Oprah Winfrey sat down with Mama Ru to discuss his career and the impact the show has had both culturally and spiritually.

The chat show icon started off the Super Soul Sunday conversation by quoting one of Ru’s most famous expressions: “We’re all born naked, and the rest is drag.”

RuPaul explained that the saying stems from realising at a young age that “this is all kind of an illusion.”

Related: The new trailer for RuPaul’s Drag Race All Stars 3 will leave you gagging

Asked by Oprah about the moment he first thought that, Ru replied: “It occurred to me when my parents were in the living room going crazy, beating each other up. I knew that couldn’t be right.

“Then, at about 11 years old, I found my tribe in Monty Python’s Flying Circus on PBS. I thought, Okay, they get it—they’re having fun.

“In tenth grade, my teacher told me, ‘RuPaul, don’t take life too effing seriously.’ I didn’t get it then, but I got it later.”

Oprah also noted that Ru uses his experience to give Drag Race contestants spiritual advice when they are competing on the show.

Related: 28 Drag Race queens all on one stage together? Yep, it happened

“We set up the situation on this competition reality show where we challenged them [the contestants] to go beyond their own limited perception of themselves,” Ru explained.

“The real challenge is for them to be willing to die and become reborn.”

The interview – which is available to read online now – also hears Ru speak about what he has learnt from drag, and why he thinks Drag Race is resonating with a new generation of kids so deeply.

Comedy Central UK will launch the latest season at 10pm on 27 January, 48 hours after its US premiere.