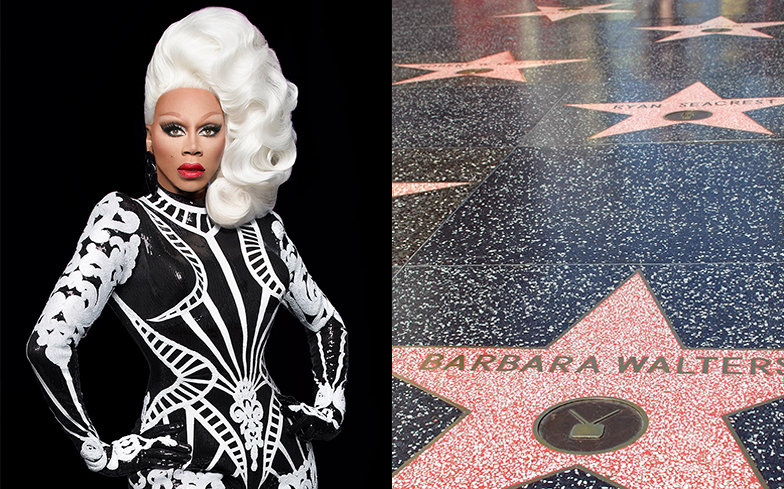 Drag superstar RuPaul will finally receive a star on the Hollywood Walk of Fame on Friday 16 March, just one day after the finale of Drag Race All Stars 3, and a week before the premiere of Drag Race season 10.

When the news was originally announced last year, the icon said: “Sweet Cheeses! My heart is beating so fast right now!”

Vin Di Bona, a member of the Walk of Fame Selection Committee, said: “[We] looked carefully at each nominee and we feel that we have selected an eclectic group of talent that will appeal to the tastes of many fans around the world.

“I know these honourees will remember the dedication of their stars with great memories and will be proud that they are part of Hollywood’s history now and forever.”

There are currently over 2,600 stars on the Hollywood Walk of Fame. Ru’s star will be placed outside the World of Wonder offices, where Drag Race is produced. Steve Irwin and Bernie Mac will also be honoured posthumously.

It’s been an amazing couple of years for the queer icon – his hit show, RuPaul’s Drag Race, won an Emmy and an MTV Award, he released three albums, he made a cameo on Netflix’s Girl Boss, and he even married his longtime partner Georges.

Now, as All Stars 3 hurtles towards its finale, RuPaul is preparing for the 10th season of Drag Race, which we’re sure will be gag-worthy if this teaser is anything to go by.

Season 10 will premiere on VH1 on 22 March, one week after the finale of All Stars 3. The season will feature 90 minute episodes and the return of Untucked on television, to celebrate ten years since Drag Race premiered.

Gagging for more information on season 10? We’ve got you covered.