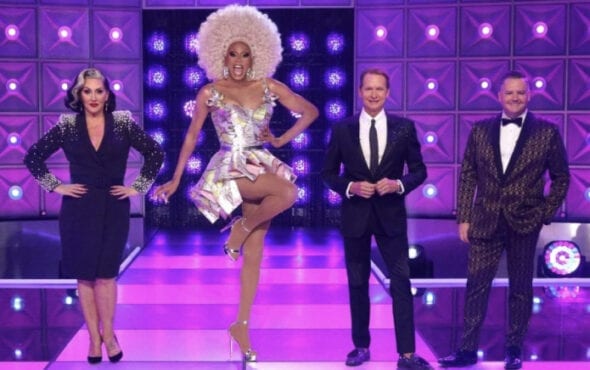 RuPaul’s Drag Race viewers are in their feelings about the emotional season 13 semi-final.

At the beginning of the episode, the queens returned to the workroom following Olivia Lux’s elimination. After praising the ‘polite diva’, the contestants shifted their sights to the looming grand finale.

“We want to f**king fight and we want that god damn crown,” Symone exclaimed.

Rosé echoed the same energy in her confessional, stating: “As much as I love these bitches, athletes don’t go to the Olympics to make friendship bracelets, I’m ready to take these bitches down.”

The next day, the queens entered the workroom and discussed what they would do with the prize money if they were to win. Gottmik, Symone and Rosé all expressed investing the money back into their drag while Miss Kandy hilariously said she would buy a boat.

Their conversation got interrupted by their very last RuMail message. Mother Ru then informed the girls that they will be performing her new single Lucky, while also creating their very own verse for the performance.

After creating their own signature verses for the performance, the queens met up with RuPaul, Michelle Visage and a bowl of 13-year-old tic tacs and discussed their drag journeys.

From drag name origins to personal revelations, no detail was left unturned during their meetings.

The contestants then met up with acclaimed choreographer Jamal Sims to learn the intricate choreography for the Lucky performance.

“This will be the hardest I’ve been on you the whole season, it’s really critical that you guys nail this, it’s gotta be great,” he said.

The queens soaked in every step and suggestion from Jamal and went on to deliver an absolutely sickening performance of Lucky.

From the set – which was reminiscent of Destiny’s Child, Say My Name video – to the iconic original verses, the Lucky performance will go down in Drag Race HERstory.

After strutting down the runway in their final four eleganza, Mother Ru, the judges and the queens got emotional and opened up the floodgates of tears.

During the judges’ critiques, RuPaul praised Gottmik for her journey, not only as a contestant but as a trans man.

“You know there are a few times during this competition that you mentioned your parents and it really touched me when you mentioned them,” Ru tearfully shared.

“Because I think about kids around the world who don’t feel that they fit in here or they fit in there or what box they’re supposed to fit in. You’ve given them a roadmap, and I watched you in this competition grow and expand.

“I am so proud of you and I know your parents are proud of you too because now they really understand what a gift you are to this world.”

The tears didn’t stop there.

After the critiques, the queens were asked to give advice to their younger selves. Symone was full of emotions during her speech, striking a chord with the judges and her fellow contestants.

“And then you’re gonna go and live your dream one day and meet someone that inspires you and she’s gonna call you a star. And you’re going to do everything they said that you couldn’t do.”

After an emotional judges panel, Mother Ru threw the queens a curveball and tasked them all with solo lip syncs. Filled with fire and passion, each queen delivered unique show-stopping performances that left us GAGGED!

In the end, RuPaul kept all four queens for the grande finale.

“That’s right. We got ourselves a final four. Condragulations, queens,” she said.

Here’s what fans had to say about the semi-final of Drag Race season 13:

THIS TOP4 IS SO FUCKING ICONIC !!!!! #DragRace pic.twitter.com/H5wiS8gdPO

i love them more than anything 😩💞 #DragRace pic.twitter.com/HDrycxgoz3

Symone didn’t have to make me ugly cry like that 😭😭😭😭 #DragRace pic.twitter.com/9mel47cFvb

“i really…….. love them all so so much. not sure what to say or do with myself.” pic.twitter.com/RR28twgbFh

She’s not fucking around. She just gets all of it, all the time.#DragRace pic.twitter.com/Wc6IJzVFne

Okay but @TheKandyMuse owning boat just cause is what she deserves #DragRace pic.twitter.com/lfQa6SQNOr

Symone talking to her younger self made me burst into tears #DragRace pic.twitter.com/B5ZOpNtQbe

me when i can’t decide who to root for #DragRace pic.twitter.com/C1WtJYZjKp

Someone bring me a soda. #DragRace pic.twitter.com/Y9NuYGwctz