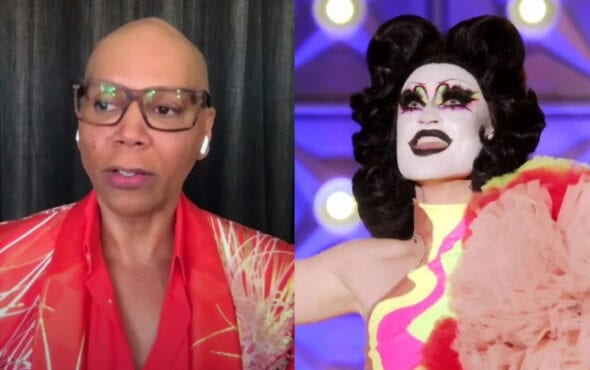 “I keep moving with what the kids are doing.”

RuPaul has opened up about the casting of Drag Race season 13 contestant Gottmik, who made history last week as the first trans masculine queen on the series.

The Emmy-winning host recently appeared on the The Late Show with Stephen Colbert, where he was condragulated for making it into the Guinness Book of World Records.

When Ru declared that he would like to make a record as the “world’s richest television host,” he was questioned by Colbert on the biggest lesson he’s learned from his time on Drag Race.

“It’s to keep an open mind. I walked into this thing with an idea of what drag is and the kids have a different idea. They keep changing it,” said RuPaul, before diving into Gottmik’s casting.

“This season we have a trans man who is on our show who is competing with the other drag queens and this man is fantastic. Fantastic! So, I keep moving with what the kids are doing.”

RuPaul has been praised for his inclusive new approach. Although Drag Race has received widespread acclaim for catapulting drag entertainers into popular culture, it has been criticised in recent years for the lack of diverse talent (a majority of the contestants identify as cisgender gay men).

In our 2019 digital cover story, Gottmik spoke to GAY TIMES about navigating the drag industry as a trans man, and dispelled any ignorant opinions on what it means to participate in the art-form.

“People cannot seem to understand how someone born female can identify as a man but still want to perform and artistically express themselves through femme drag,” said Gottmik.

“In my opinion, a healthy soul/person needs a good balance of masculine and feminine energy to survive. If your artistic outlet is drag, anyone who has anything to say just hasn’t been enlightened on the subject and is probably wishing they were brave enough to express themselves as honest and openly.”

“Drag is hard, and being trans is even harder, so anyone who is doing both is extremely inspirational to me.”

Gottmik made his mark on the first episode of Drag Race season 13 after winning a lip-sync showdown against Utica Queen to Lindsay Lohan’s debut single Rumours.

According to Deadline, the season 13 premiere became the most-watched episode in the franchise’s 12-year herstory with an unprecedented 1.3 million viewers.

Next week will follow the lip-sync winners – Gottmik, Kandy Muse, LaLa Ri, Olivia Lux, Symone and Tina Burner – as they write lyrics and perform choreography to a new version of RuPaul’s song Condragulations.

In a major twist, the losers – Denali, Elliott with 2 T’s, Joey Jay, Kahmora Hall, Rosé, Tamisha Iman and Utica Queen – will have to vote one of their fellow contestants off the show for good.