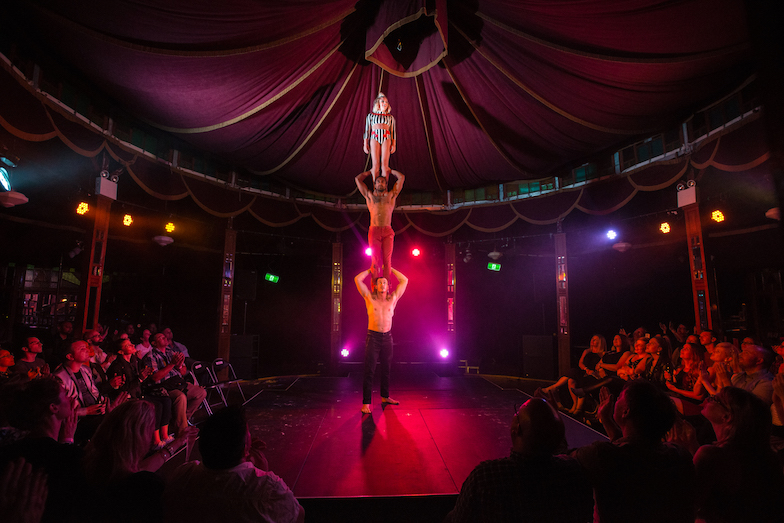 Fresh from a run at the Edinburgh Fringe, this risqué Australian show has opened at the Underbelly festival on London’s Southbank, directed by Elena Kirschbaum.

Rouge brings together a troupe of six performers in what it describes as a night of acrobatics, operatic cabaret and tongue in cheek burlesque. We’d say that description is a little misleading – there are only a handful of cabaret or burlesque scenes, with the focus of the evening predominantly being circus performance (albeit with an adult flavour). Unfortunately on press night, opera singer Issie Hart was not well; while she still took part in the dance routines, her songs were removed from the show. It would have been interesting to see what variety her live vocals could have brought to proceedings.

It starts promisingly enough, with Paul Westbrook addressing the audience – “ladies, gentlemen, and friends beyond the binary” – and building anticipation for what we’re about to witness. Unfortunately we didn’t hear from him again until the show’s conclusion. In a performance of this format, we’re used to having something – be that some dialogue, a bit of acting or a song – between sketches. Rouge doesn’t have any linking sequences; instead there are quite a few awkward silences with the audience just sat waiting to see what happens next. On occasion it felt a bit flat.

A handful of scenes were a little disappointing, however. As we’ve come to expect from these types of shows there was as fire eating and breathing sketch, which looked nice enough, but didn’t feel particularly exciting or dangerous – certainly nothing we hadn’t seen done better before. Visual effects such as strobe lighting were wildly overused, and we were expecting some sort of outrageous grand finale – when we realised we’d witnessed the end of the show we were a bit underwhelmed.

It’s a shame as at its heart, Rouge is a pretty entertaining production. The performers are talented and there’s a healthy amount of humour deployed throughout. We have, however, seen a lot of circus, cabaret and burlesque performed at the Underbelly over the last few years and this didn’t feel as exciting, dangerous or original as some of the shows we’ve seen. Rouge is still a perfectly enjoyable and sometimes subversive night of adult circus – it just didn’t wow us.