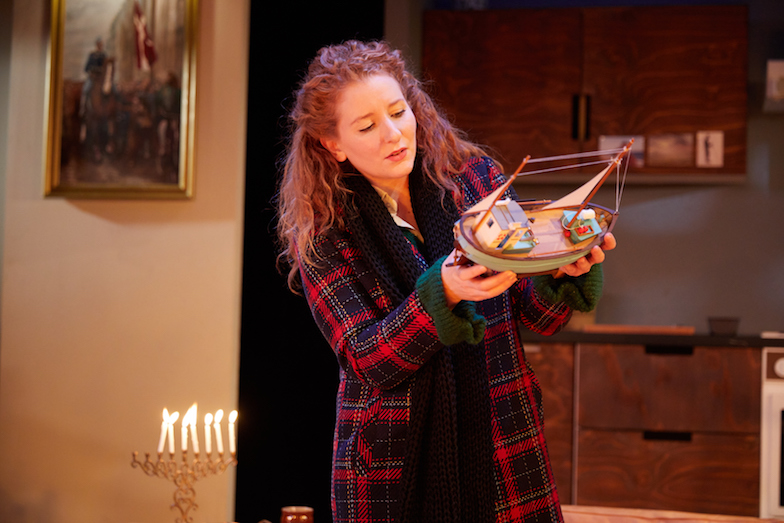 Directed by Kate Fahy, A Bodin Saphir’s debut play has premiered at the Park Theatre.

Set in Denmark in 2001, Rosenbaum’s Rescue details the story of Lars and Abraham, two old friends who have not seen eye to eye in decades. To assist with the writing of Lars’ new book, the pair have met to recount their memories of a lesser-discussed mystery of the second world war; just how did 7,500 Danish Jews escape unharmed over the water to neighbouring Sweden, under the noses of the Nazi occupiers? As a snow storm takes hold they become trapped overnight in the house, alongside Abraham’s long-suffering wife Sara and Lars’ daughter Eva. The conversations evolve to explore national identity, race, religion, sexuality and politics, to name a few.

It’s a play which is over-ambitious in the number of issues it attempts to cover – or at least it is in the second act. The first half concerns itself mainly with character development, which is not unreasonable, but results in a frustratingly drawn-out slow burn when compared to the over-complicated second half.

It tackles its issues intelligently, but some of the conversation pivots seem far too contrived to be believable. During a discussion regarding the native Danish population, who helped the Jewish migrants during the war, the conversation swiftly turned to the current migrant crisis, then on to voting intentions and populist politics; it just didn’t seem natural or believable. It’s disappointing, as there was certainly scope for an interesting debate to be had, but instead it felt forced throughout.

It’s a play which does, however, boast universally strong acting. Each actor may initially appear to be fulfilling quite a stereotypical role – Neil McCaul as the self-righteous academic Lars; David Bamber as the religious, nostalgic Abraham; Julia Swift as sweet, sympathetic hostess Sara; and Dorothea Myer-Bennett as Eva, representing the questioning, challenging voice of the youth. However, each character isn’t as he or she first appears – they all have a secret that they’re keeping from the rest of the group. As the long evening becomes a painful night of truth-telling, we are treated to a quartet of intriguing, nuanced and well-rounded performances.

Rosenbaum’s Rescue feels very much like a play of two halves, with neither being quite as successful as it should have been. The first act dwells too long on establishing its characters, to the extent that almost nothing happens; while the second seems to try and do too much, resulting in a lack of clarity. It’s a shame as it’s a play which makes plenty of interesting points, features a terrific cast and tells a fascinating, lesser-known story. Very nearly a great production.