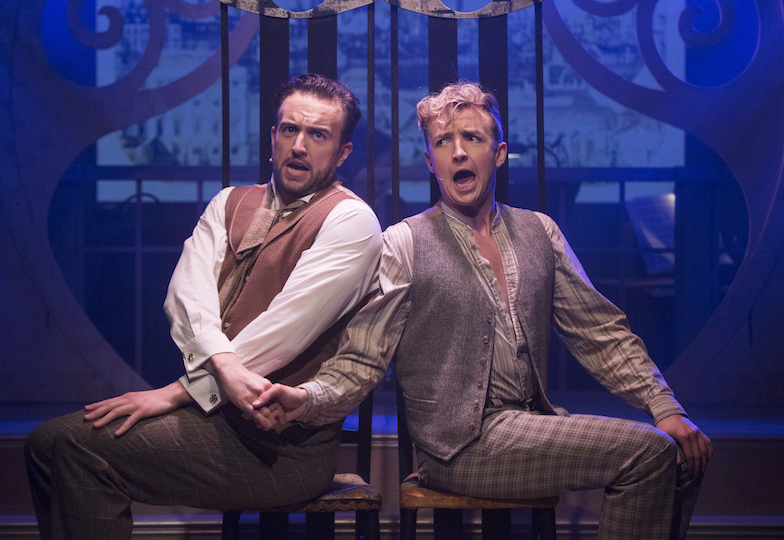 Originally staged off-Broadway in 1987, one might initially think that Romance Romance is an odd choice for the UK’s only LGBTQ dedicated theatre space to resurrect. Until, that is, you realise that that the musical has been especially reimagined as a queer piece by the original writers – and director Stephen Dexter who helmed the first West End production. And this shiny new gay version works superbly.

There’s none of the clunkiness that can sometimes be apparent when texts are subverted in a Romeo and Julian way – audiences unfamiliar with the piece will assume that this was always written about homosexual relationships, so naturally do the narrative and themes bend themselves to this interpretation.

The other unusual thing to note about this show is that – rather like an old cinematic ‘double feature’ – the acts on either side of the interval have no connection beyond some very loose themes, and the cast. (Arguably, the queering of the piece gives the two halves more connection than could be found in the original straight version.)

Act I is an historical tale of double disguise set in 19th century Vienna, while Act II jumps forward 100 years and across the Atlantic to a shared beach house in the Hamptons. It’s structurally unusual, but the disconnect is not as jarring as one might expect. The result is two great shows for the price of one.

Act I, subtitled The Little Comedy, is a charming and witty farce that highlights the talents of Blair Robertson as Alfred and Jordan Lee Davies as Valentin. Both upper-class socialites dreaming of a simpler life, they disguise themselves with the trappings of poverty, and end up falling for each other’s alter-egos. Like a gay fairy-tale, this is a rich and seductive yarn that – despite being relatively low on incident – draws one in to its world and succeeds with character and comedy. Lee Davies as the younger of the pairing gives a cheekily winsome performance that contrasts superbly with Robertson’s studied and sexy turn as the ‘daddy’ of the relationship; magical and compelling.

It’s all change for Act II’s Summer Share which concerns two modern married gay couples sharing a beach house. The younger of each pair are old friends, and the plot – such as there is one – revolves around a will-they-won’t-they dilemma of a possible affair between the two while their older husbands are asleep. Alex Lodge as Sam and Ryan Anderson as Jeremy are perfectly cast as the potential transgressors, both deliver pain and pathos by the bucketload. And there’s excellent comic relief from Robertson and Lee Davies as the older spouses. While not quite as gripping as the first half, there’s still much to be savoured in this melancholic meditation on unspoken attraction.

An on-stage band adds real panache to proceedings and musical direction by Aaron Clingham and staging by Summer Strallen give proper class. The movement and vocal talents of the whole cast are exceptional. A concept that could easily have ended up as a curate’s egg has actually formed into a multi-faceted jewel to be treasured.