Rock of Ages an entertaining pastiche of 1980s culture – review 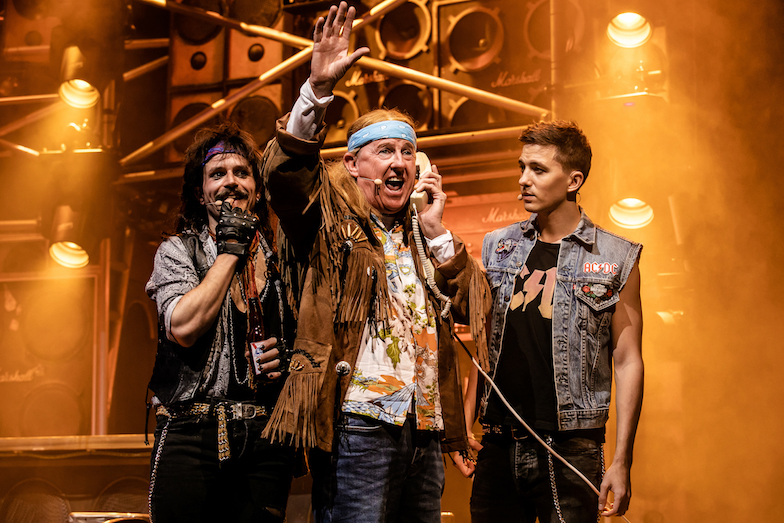 Directed and choreographed by Nick Winston, the 1980s-themed jukebox musical has opened at the New Wimbledon Theatre.

Rock of Ages is a fairly straightforward California-based love story, set to the tune of 25 instantly-recognisable rock anthems – songs such as We Built This City, The Final Countdown and Don’t Stop Believin’ are all present and correct. It tells the story of Drew (Luke Walsh) and Sherrie (Jodie Steele),  two young hopefuls who have made their way to LA to pursue their dreams. They both struggle to make their way in the city, and their romance is complicated with the arrival of rock legend Stacee Jaxx (Kevin Clifton) who takes a bit of a shine to Sherrie.

It’s all fairly predictable and obvious stuff, but that’s not to sat it isn’t a lot of fun. It’s an amusing and entertaining pastiche of 1980s style and culture – the text is at its funniest when it acknowledges how daft the on-stage action is. Regularly breaking the fourth wall to poke fun at the show, the actors make jokes about the unnecessarily gratuitous backing dancers or the vulgarity of the toilet humour; Lonny (Lucas Rush) in his secondary role as narrator had some very funny lines. We felt occasionally is was being a bit too crass or silly, but it mostly worked in the context.

We were genuinely impressed by the quality of the musicianship, too – of course we knew that Kevin Clifton was a talented dancer and performer, but his singing was superb throughout. All of the principal cast turned in excellent vocal performances, and Pop Idol’s Zoe Birkett as Justice had a wonderfully raspy and soulful vocal – we could have happily listened to her all night. The band were tight throughout and some of the actors took turns on the instruments, too.

Rock of Ages gets a lot right. It may not be clever, or subtle, and it will naturally appeal more to fans of 1980s music  – but it’s a great fun romp through two and half hours of rock anthems, featuring some impressive vocal talent and a genuinely funny text. A highly entertaining, feel-good night out.