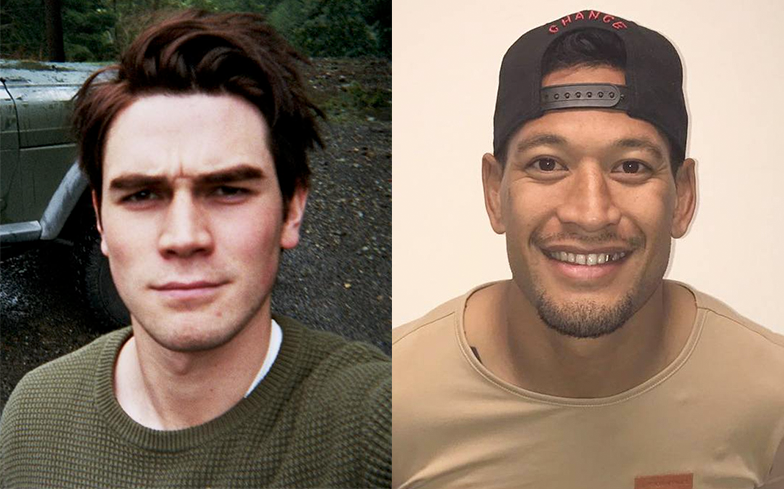 “Our role as Christians is to LOVE not judge. What gives you the right to condemn?”

Riverdale star KJ Apa has slammed former rugby captain of the Australian Wallabies, Israel Folau, for claiming gay people will go to hell if they don’t “repent their sins”.

The 29-year-old sportsman, who previously voiced opposition to same-sex marriage, shared an image depicting ‘God’s Plan’ to his Instagram account last week when one of his 337,000 followers asked him: “What was gods plan for gay people??”

In response, the Wallabies and Waratahs player wrote: “HELL… Unless they repent of their sins and turn to God.”

Yesterday, Apa posted the screenshot of Folau’s Instagram comment, with the caption: “Very disappointing comments, our role as Christians is to LOVE not judge. What gives you the right to condemn? Are you perfect? Sit down.”

The New Zealand born actor received praise for standing up for the LGBTQ community:

@kj_apa getting fiesty in insta got me feeling some kind of way 😍 go KJ! #Preach 🙏🏻💜 pic.twitter.com/B6rvVcMPOd

KJ Apa did what?
He did THAT! pic.twitter.com/WuNeseY8Wh

Love this post from @kj_apa’s Instagram story, calling out a star rugby player, a Christian man who publicly condemned gay people to hell. That’s not how a Christian shows love to their neighbor. Leave the judgement to God. pic.twitter.com/Si70OploTy

Earlier this month, Riverdale was renewed for a third season by The CW.

President of The CW – Mark Pedowitz – said: “As The CW expands to a six-night, Sunday through Friday schedule next season, we are proud to have such a deep bench of great returning series for 2018-19.

“By picking these ten series up for next season, we have a terrific selection of programming to choose from when we set our fall schedule in May, with more still to come. And I’m especially happy that we’ll continue to work with the incredibly talented casts, producers, and writers who create the series our fans are so passionate about.”

Since Riverdale’s premiere, the show has received highly positive reviews for its portrayal of LGBTQ characters, with its depiction of a gay romance in its first season, and the coming out of a major character in the second.

Watch this compilation video of all the gay scenes from the first season of Riverdale here.