Rita Ora, Charli XCX, Bebe Rexha and Cardi B are goddesses in the Girls video 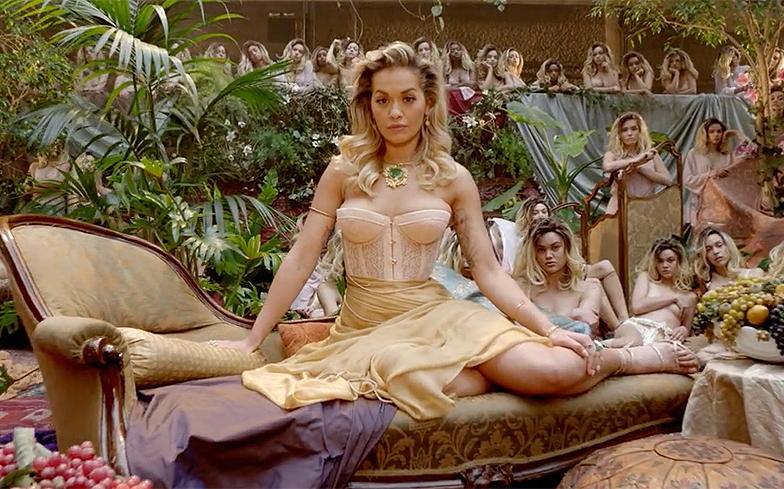 Rita Ora has dropped the video for her sexually fluid anthem, Girls, featuring Charli XCX, Bebe Rexha and Cardi B.

The video for the synthpop, summer-ready track features an army of women in a variety of different settings, such as the woods, a pool, a box etc. Cardi B even shows up via hologram. Werk!

Girls is expected to appear on Rita’s upcoming (and long-overdue) sophomore album alongside last year’s smash hits Anywhere and Your Song.

Since its release last month, the track has received backlash from many in the LGBTQ community, including openly gay singer Haley Kiyoko, who took issue with lyrics “red wine, I just wanna kiss girls,” and “kush loving”, which suggest intoxication is a reason for girls kissing girls.

“A song like this just fuels the male gaze while marginalising the idea of women loving women,” argued Hayley in a statement on Twitter, adding: “I don’t need to drink wine to kiss girls; I’ve loved women my entire life.”

Rita later issued an apology to anyone offended by the song, and used the moment to apparently confirm her bisexuality: “I have had romantic relationships with women and man throughout my life and this is my personal journey.”

But while many have criticised the song, others have come to Rita’s defence, arguing that she was simply speaking from her own experiences.

During an interview with PAPER, model and actress Cara Delevingne – who is open about her own sexual fluidity and queer identity – was asked about the controversy, and she made it clear what side of the fence she’s on.

“I think it’s a really great song, and I don’t think there’s anything wrong with it. I think it’s not fair to point a finger. I love Rita. I think she’s a wonderful artist and I always support her in what she does,” she explained.

“I don’t think it’s right to say her experience and her words are wrong. If she hadn’t ever felt that way and it wasn’t true then that would be weird. She’s being proud of something and saying it.”

Watch the video for Girls below: