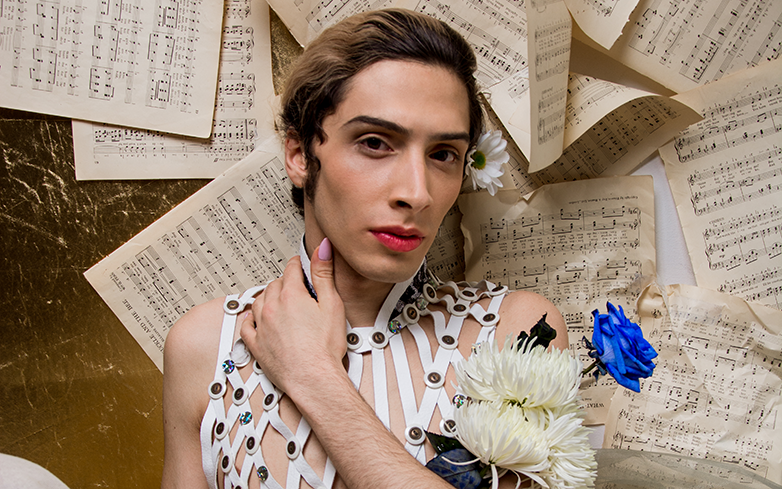 “Living in such an open country like England really helped me to embrace my queerness, my femininity; my true self.”

Italian singer-songwriter Andrea Di Giovanni struggled with his sexuality for most of his youth. Growing up in a country with such staunch, anti-gay views, the performer felt like he was unable to express his queer self and live authentically.

“I’ve grown up with the idea that gay is not okay,” Andrea admits. “It was something perceived as sinful or, even worse, as a mental health issue: a disease from which you can and must heal while you seek salvation.”

Andrea moved to London when he was 19, which he says allowed him to embrace his queerness and “true self”. He tells us: “It made my art more real, raw, honest, less manufactured and less fake.”

In celebration of the release of his incredible dark-pop track, Shame Resurrection, we caught up with the rising star and discussed internalised homophobia, growing up gay in Italy, and how living in England has influenced his art.

How would you describe your sound?
I’m very open to all genres when it comes to my sound. I don’t like the idea of labelling everything, especially when it comes to music. My lyrics are often quite engaging and I like to enhance that with darker/electro/indie production in my verses, which then explodes in big, catchy, pop choruses, all supported by heartfelt vocals.

When did you realise you wanted to become a musician?
Growing up I was very shy and I always found true comfort in music. It was a way for me to express my feelings and explore my inner world. After taking part in a tv show in Italy I realised that I could do something important with my talent and that music was the way to go. I was able to see it for myself and feel it in my guts. I knew it was going to be quite a journey!

Who were your role models growing up?
My biggest role model growing up was my mom. She is an unbelievably strong woman; incredibly loving and caring towards others. She was by my side during the toughest times of my childhood and teenage years, and she is there for me now! As a kid I wasn’t exposed to a lot of queer culture. I was totally obsessed with Britney Spears, Madonna – my dad is a huge fan – and Whitney Houston. I remember dancing and lip synching to My Prerogative by Britney Spears all over the house. I used to spend afternoons on my own carefully listening to Whitney’s Greatest Hits, singing my heart out.

Oh, I can identify with you there! So, your lyrics are very personal, is it important for you to tell your own story in your music?
Absolutely! I like to use music as a way of telling people what I’ve been through. By doing so I’m hoping they can find some comfort, resonate with my message, and be happier with themselves. Writing has a very therapeutic effect on me. When I’m having an issue that I struggle with or when I feel down, I write about it and it instantly helps me to make sense of things and move on.

Your new single, Shame Resurrection, is about internalised homophobia within the LGBTQ community. Why was it important for you to discuss this in your music?
I think that it’s important to talk about mental health issues nowadays more than ever. As artists we are always required to meet the expectations that other people have of us, even when we are feeling down or are struggling. I wrote this song two years ago and at the time I was seeing someone who’d been ‘acting straight’ and had a great dose of internalised homophobia. I felt so angry because I hated how the sense of shame was holding him back, preventing him from being a happier person.

You’ve released quite a few singles since your first EP in 2016. Can we expect another EP or a full length album any time soon?
I’m working on my debut album! As it’s my debut, I want to craft it properly, making sure that it tells a story and represents my queer self to the max. It will include the four singles I’ve already released and I have few cool collaborations in mind for the remaining tracks. Exciting!

You have a very unique, androgynous aesthetic. Who inspires your fashion?
Thank you so much! I’d definitely say David Bowie and Grace Jones are the main ones. I love how they kept breaking gender stereotypes by pushing masculinity further into a more fluid, non-binary reality. Lately I’m in love with the aesthetics of Jamie Windust, Travis Alabanza, Matty Bovan, Sussi, Alok and Charles Jeffrey… they are pure queer excellence.

You moved to London when you were 19. How come you moved at such a young age?
I wasn’t really happy with myself at the time. Coming off the talent show was hard and I went through some depression because my music wasn’t going anywhere. I was struggling with being open about my sexuality and I was looking for a change, a new chapter in my life. After discovering Tech Music School (now BIMM London) through a friend, I applied for a one year diploma course. I was accepted and moved to London all within two weeks’ time.

How has living in England influenced your art?
Living in such an open country like England really helped me to embrace my queerness, my femininity; my true self. It made my art more real, raw, honest, less manufactured and less fake. London’s lifestyle can be quite challenging but has its rewards; there’s so much beauty out here, so much art. So many great people trying to make this world a better and more inclusive space just by being their true selves.

You come from quite a strict Italian background. How was your coming out experience?
The actual moment I came out to my parents was fairly easy but getting there was quite a journey. I’ve grown up with the idea that gay is not okay. It was something perceived as sinful or, even worse, as a mental health issue: a disease from which you can and must heal while you seek salvation. Consequentially I always tried to repress my queerness, even during the first couple of years here in London. I was so scared of what people would have thought of me once I came out; I used to be incredibly hard on myself.

Same-sex marriage isn’t legal yet in Italy. Do you feel like this will happen soon?
Ah, that’s a touchy subject for me. I still argue about it with my mother today. Actually it baffles me to see how many people are actually against it. The most absurd argument they put forward is that, according to religion, the institution of marriage is between a man and a woman and changing this would be fundamentally wrong. First and foremost, religion shouldn’t have anything to do with basic human rights and secondly, how can same people who preach charity and openness deny love between two human beings? I just don’t get it. I truly hope this changes soon.

Do you think the country is accepting of LGBTQ people?
No… I think that our existence is barely acknowledged. We aren’t safe to be ourselves and are pushed to the edges of society. Every time I go back to Italy, I can feel the difference from London and it’s heartbreaking. Hope is there though. When things aren’t good there’s always a sense of rebellion coming from those who are repressed. In the future I’d love to see more queer people making it in the Italian music industry. I aim to be one of them, and to provide a platform for those who come after me!

What’s next for Andrea Di Giovanni?
I should be hitting the studio soon to write and record some new tracks and in the meantime I’ll be organising everything regarding the album. I want it to be my best project so far and hopefully take it to the next level!