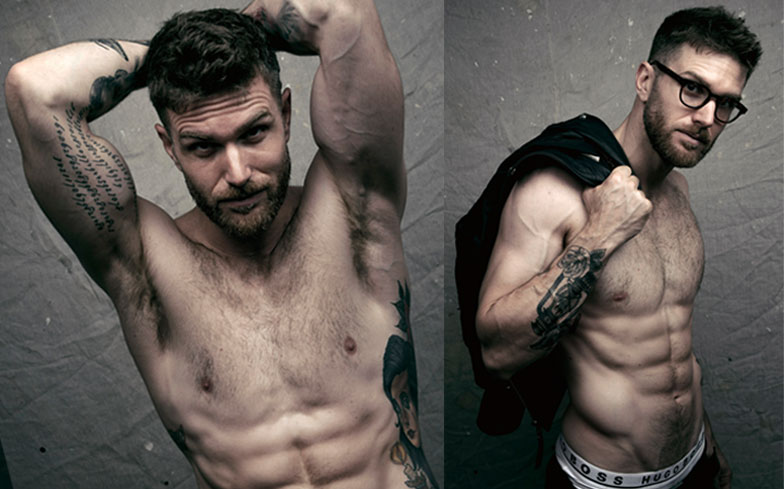 As he shows off his impressive body as our Gay Times Fitty,  Joel talks to us about body image in comedy, avoiding desserts – literally – and the importance of staying grounded.

Related: Callum Aylott strips off in the name of charity in this exclusive shoot

“When I’m sat in London my time always gets filled up with TV shows and stuff, but when I’m on tour I only work in the evening. So, I fill the day with working out, then I gig in the evening.

“And nowadays you’ve got Marks and Spencer and Waitrose, so you can just have salads along the way.” Joel later explaining why he’s such a big fan of CrossFit.

“It’s just so good. But I believe everyone should find their own thing. A lot of people force themselves to go to the gym, but if you’re forcing yourself, don’t do it!

Related: Take a look inside Tom of Finland’s pool party in this exclusive clip from new biopic

Joel admitting he understands why some people find CrossFit intimidating.

“Honestly, give it a go. It will change everything for you! It’s a real cult, as soon as you’re involved, you’re stuck. It’s a great thing to be addicted to. Some people choose drugs or sex, I choose to sweat with other men.” But can being in great shape be a hindrance in the world of comedy?

“Yeah, it can sometimes,” Joel tells Gay Times. “But when I did I’m a Celeb… I hope people were still finding me funny as well as looking at me in the shower.

“Back in the day, you had to be more self-deprecating to be a comedian, but now I think it’s changing. American comedy influences British comedy now, because of YouTube and stuff, and American comedy is much more outward and confident.

“You can have a great comedian like Kevin Hart, who’s sponsored by Nike and has his top off all the time doing work out videos. As long as you’re likeable and funny, that’s the core of it – even if you look like someone that’s walked fresh out of Love Island.” Related: Wicked star Oliver Savile is anything but a fright in this exclusive shoot

Joel adding what it means personally for him to shoot (behave) for an LGBT+ publication.

“Well, I think of it in the same way I would appearing in a straight magazine. I really like Gay Times, I think it’s really important that it keeps going, and it keeps relevant and great! “The fact that you’re even considering me to be inside the pages of it is a wonderful compliment.”