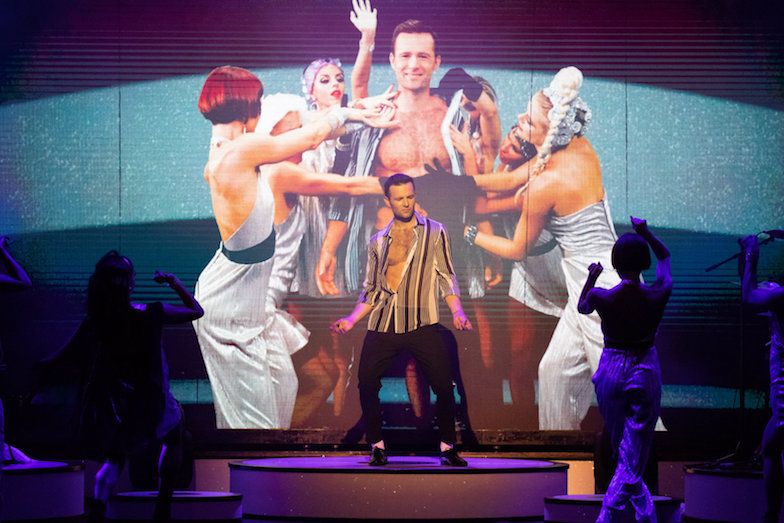 Directed and choreographed by Gareth Walker, this show is a bit of an unusual concept. It’s not really a jukebox musical – there isn’t a story – it’s more of a tribute to the sounds and styles of the 1960s, told through a series of highly-choreographed musical numbers. Unsurprisingly given the talent involved, it feels a bit like an extended episode of Strictly Come Dancing on the West End stage. It’s presented in the format of a TV show, with host Cavin Cornwall introducing each section, and proceedings are interspersed with short pre-recorded VTs from recognisable faces including Lulu and Tony Blackburn.

Given that the audience will mainly be coming along to hear the songs and see the stars, we found it a bit odd that the two are kept largely separate. Most of the vocal heavy lifting is left to singer Jill Marie Cooper, who has an impressive voice and stage presence, but we’d have liked to have heard more from the boys. Both Aston and Jay have a couple of songs apiece and impress; Louis reveals a surprisingly serviceable singing voice, while he also has an opportunity to show off his gymnastic prowess; and Harry takes to the drums for a minute or two. Their individual moments to shine are few and far between.

While many elements of the show worked, the quality was inconsistent. The first half lacked excitement – given that the production values were very much more-is-more, throwing everything including the kitchen sink at some of the numbers, there were several moments which just didn’t feel all that exciting or memorable. Things improved in the second half, however – a barnstorming rendition of My Generation was a standout, the Beatlemania segment entertained, and the tribute to Burt Bacharach featured some lovely moments.

There did come a point, however, where the performances felt a little bit repetitive. Given the premise of the show it wasn’t too much of a surprise, but after a while we had the impression we were just watching the same sort of thing over and over. Weighing in at substantially over two hours it could have benefited from a bit of editing; we weren’t sold on having so many VTs and we also never really warmed to the presenter. He had a handful of decent lines, but the majority of the jokes were a bit cringe.

Having said that, Rip It Up – The 60s is still a fun little night of light entertainment and an enjoyable tribute to the influential decade. It will mainly appeal to fans of 1960s music and/or Strictly Come Dancing, but there’s just about enough here to ensure a good time will be had by all.