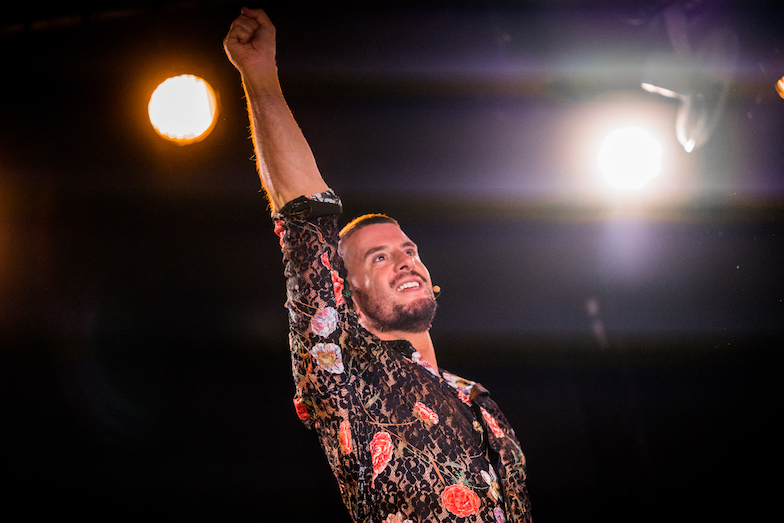 Alexis Gregory’s one-act, one-man play has opened at Dalston’s Arcola Theatre ahead of a UK tour.

Riot Act is quite a unique proposal. This one-hour piece of verbatim theatre offers three fascinating accounts of activism in the 1960s, 1970s and 1980s. First up is actor and writer Michael-Anthony Nozzi, one of the few remaining survivors from the night of the Stonewall Inn riot in 1969; next is radical drag queen Lavinia Co-op; and finally we are introduced to Paul Burston, the writer who led the London branch of ACT UP.

Each insight offers a compelling account of gay rights activism over three decades, in both the UK and USA. The 20-minute segments have been created from hours of interviews Gregory conducted with his three subjects and each tells a fascinating story. These oral histories offer some genuinely very interesting perspectives and don’t shy away from the realities of their stories; Michael-Anthony certainly doesn’t offer a romanticised portrayal of the Stonewall Inn during the 1960s.

What makes the play really work is Gregory’s utterly captivating delivery. Each character is created with an outfit change, a different accent and a handful of neatly-observed mannerisms. Rikki Beadle-Blair’s direction is very much a less-is-more approach; there’s not really anything in the way of set of props, and scene changes are denoted through a subtle change of lighting and a bit of background music. This is effective as it ensures Gregory remains the focus of our attention throughout.

The text was most effective when it caught us off guard, which happened on numerous occasions. Notably, Paul Burston’s testimony about the important roles that women played in the ACT UP movement was both unexpected and extremely welcome – it happens all too often that women’s stories are erased from LGBTQ+ histories.

Riot Act is a short, smart play which offers some interesting and engaging accounts of gay rights activism. It does what it sets out to do extremely effectively, and coinciding with the 50th anniversary of the Stonewall Inn riot makes these performances feel extremely timely. Well worth checking out.