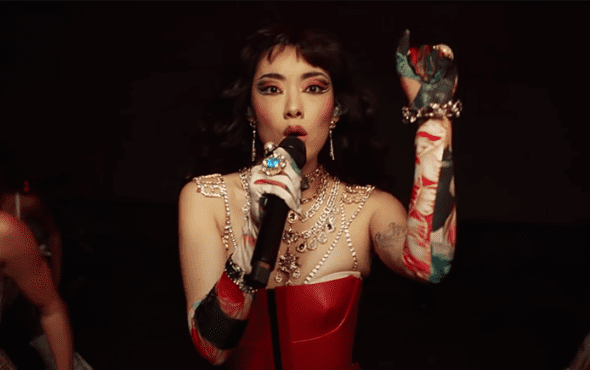 Flanked by a team of dancers with bejewelled face masks, the British singer-songwriter served choreo, face and vocals as she performed XS, taken from her critically-acclaimed self-titled debut album.

Rina’s performance was met with praise from critics and fans, becoming a worldwide trending topic on Twitter.

One stan called it the “performance of the year” while another tweeted of the star: “A superstar is born. A legend has enter the building. Everyone get the fuck out of her way… A new queen has landed on the throne!”

Although XS is a 2000s-inspired track that takes influence from classic R&B anthems, it’s grounded in present day, tackling issues such as capitalism and climate change.

The hilarious music video reflects the song, as Rina plays a glamorous robotic (and soon to be malfunctioning) saleswoman trying to flog her new RINA water on a parody shopping channel (you can watch the video here).

She explained: “I wanted to reflect the chaos of this post-truth climate change denying world in the metal guitar stabs that flare up like an underlying zit between the 2000s R&B beat that reminds you of a time when everything was alright.”

You can watch Rina Sawayama’s performance of XS on The Tonight Show Starring Jimmy Fallon here or below.