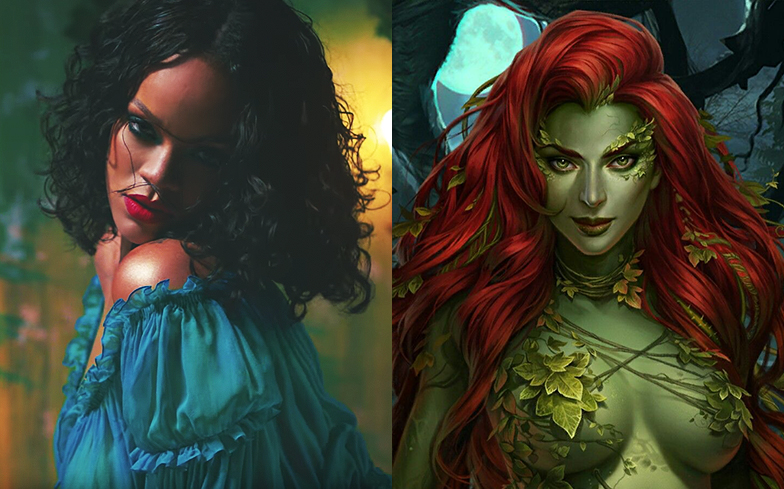 Has Rihanna signed on to play Poison Ivy in the DC Universe?

The singer-songwriter fuelled rumours she was playing the iconic villain after uploading a close-up of her Fenty boots on Instagram alongside the caption: “bat-mobile, but make it fashion! get into this matte leather-rubber fusion tho.”

“Oh that? Are you serious? No, that has nothing to do with Poison Ivy,” she told Entertainment Tonight. “That has a lot to do with Batman [because] I have separate obsessions. I have a bigger obsession with Poison Ivy. I’m just being honest.”

Rihanna admitted she was originally inspired to dye her hair red after seeing Uma Thurman in the critically-panned 1997 film Batman and Robin. However, if DC ever recruited Rihanna for the role, she says she would be open to the opportunity.

“You know what, they didn’t call me yet,” she said. “But if they did, I would love to go in and try out because Poison Ivy is one of my obsessions in life. I did it for Halloween one year, I mean, come on!”

In the comics, Poison Ivy identifies as bisexual and has been romantically involved with fellow DC character, Harley Quinn, who was portrayed by Margot Robbie in Suicide Squad (2017). She will reprise her role in Birds of Prey (2020).

Whilst promoting her period drama, Mary, Queen of Scots, Robbie said she wants the relationship to be explored on screen. “If you read the comics you know that Poison Ivy and Harley have an intimate relationship,” she explained.

“In some comics they convey it as a friendship; in other comics you can see that they’re actually sexually involved as a couple.

“I’ve been trying to – I would love to have Poison Ivy thrown into the universe, because the Harley and Poison Ivy relationship is one of my favourite aspects of the comics, so I’m looking to explore that on screen.”