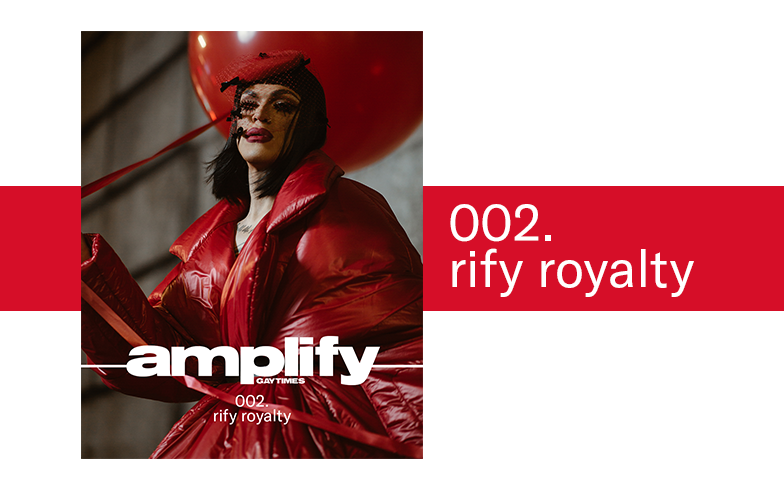 “I don’t care about gender norms, genitalia, tucking or appearing one gender or the other,” NYC-based performance artist Rify Royalty tells us over the phone. “I just wanna pull a look that makes sense to me and make sure that I enjoy the finished product. I don’t care what people see it as. It’s what it means to me.”

Interesting quote to start with yeah? Have we piqued your interest? Well keep reading, because this gender-bending performer has a lot to say about drag, masculinity, and all you fucktards who engage in ‘masc4masc’ culture (not you, but it could be you). First, a bit of backstory? Rify Royalty – real name Sharif Abaz – is a prominent fixture in the US drag community, and is known by her peers for her sickening lewks that vary from David Bowie-esque androgyny, classic pageant drag and full-blown Club Kid extravaganza. Over the past few years, she’s made her mark as an established MC, having hosted Drag Race viewing parties with stars from the franchise, and several other club nights around the motherfucking world (we would’ve used our go-to phrase ‘mothertucking’, but she doesn’t tuck, so.)  “There would be people of all genders, all colours, it would be very inclusive,” she says of her performances. “I always try to make sure that I feature women. My personal acts are always disco or 80s, or 90s numbers. I don’t ever do anything super current. I try and keep things sexy and weird at the same time. If you can feel sexually confused and weirded out during my numbers, then I’ve done my job.” If we didn’t pique your interest the first time, then that should’ve done it.

Like most performers, Rify started her drag career after she went to local parties, donned a couple of friend’s wigs (we’ve all done it hun), but it wasn’t until one year at Pride that she realised it could be a full-time career. “There’s always people who say like, ‘Are you a Halloween queen? Or a Pride queen?'” she says. “I was a Pride queen. You always start drag on either Halloween or Pride. So I dressed up for Pride, went out and then loved it, and then went to parties and would pull out a look just for fun. Then I started go-go dancing, and slowly people would start asking me to perform, so I would perform for fun and it was a bit burlesque-y and a bit draggy kind of thing.” In 2014, Rify began her own monthly party, Straight Acting, for “butch queens up in pumps”, which she was inspired to start as a tongue-in-cheek way of giving a massive middle finger to men on dating profiles who look for “masc4masc, no femme, straight acting lads only”. She trolled men on apps such as Grindr and Scruff when marketing the event, posting images of herself in drag with the profile name ‘Straight Acting’. “It got people talking. Like, ‘Why are all these drag queens on Scruff with the profile name Straight Acting?’ And that was our official promo for the party and so it was a smart and funny way to troll all that dialogue that was happening on those apps, but making it playful and celebratory.” She adds: “I think if we’re throwing parties, it should be for the queer community, especially at a queer bar, so I wanted to have a show that was not like any other drag show, which featured unpolished queens or queens who were masculine or boyish. I had fellow go-go boys who just wanted to come out in a look. It kind of just highlighted that, it also highlighted women who always go through all of that bullshit when it comes to double standards.” Straight Acting evolved over time and now includes all kinds of queens, polished, unpolished, and several Drag Race alumni. Check out some gag-worthy performances from queens such as Sasha Velour, Aja and Miz Cracker online (gagging may occur). However, because she does her part as an activist by hosting Straight Acting, it doesn’t mean she won’t call out bullshit on the aforementioned dating apps. “If I see profiles that say ‘masculine only’ or whatever and they message me, I’m gonna let them know right away. What you think of masculine is actually just performative, because that’s what it is at the end of the day, masculinity is performative. Anyone who has any problematic dialogue in their profile, I’m gonna call them out. I’ll be like, ‘We’re not gonna fuck because this is a huge issue for me.’ I also think it’s important for people to do that on a regular basis. Call people out on their bullshit, because some of them may not even know they’re spewing bullshit, but if you tell them, they might rethink it. It might be one person whose perspective you’ve changed.”

Although the self-described “visceral” performer is an androgynous queen with a need to call out toxic masculinity, she says it’s not particularly important for her to blur the lines between masculinity and femininity. She’s doing what she wants to do, and rightfully thinks we should all give “less fucks” about what she’s got between her legs and how she presents in drag. Because she’s a certified “muscle queen”, Rify receives a lot of criticism for not looking femme enough. “It’s really generational. Right now, we’re in a time where – and it’s always been that way – drag queens who are feminine presenting get the most praise. A drag queen could not be very talented or a great performer, but if she looks like a fishy woman, then she’s gonna get all the praise in the world. Then, there’ll always be the side comments from other queens like, ‘That’s a man’ blah blah blah. It’s like, ‘Well yeah, I’m a man.’ It’s like when a straight person tries to call you a homophobic slur like ‘Oh you’re so gay’ and it’s like ‘Yeah I am.’ It’s the same thing with drag queens.” Rify continues: “But we’re a very genitalia, gender-policing culture, where everyone needs to know what your pronouns are or what your genitalia is. No one is comfortable with ambiguity. That person is a person, they’re a great performer and it doesn’t matter. There’s a lot of education needed, letting people know that drag is the whole spectrum, that it’s meant to play on different genders.” She’s often compared by narrow-minded people to her friend and fellow performer, Kameron Michaels, who rose to fame on the tenth season of Drag Race. Why? They have tattoos, work out, and sometimes put a wig on their head. See? Narrow-minded. “I was all over Reddit last season. My friends were sending me all the comments of people who were like, ‘She’s just another version of Kameron Michaels, she looks like a man.’ Yeah, I’m a man, that’s what drag is, it’s gender performance. I’ve never called myself a female impersonator, I’ve always said I’m a drag queen. If drag is female impersonation, let’s impersonate all women of all spectrums. There are cis women in my life who have body hair, don’t have large pads or large breasts, know what I mean?” Rify, however, does credit Kameron with breaking the boundaries of how a drag queen is perceived. When the Nashville born performer was first announced on the series, she was counted out by fans because of her muscular physique. Later, she proved all the haters wrong when she made top three and proved to be one of the most sickening lip sync assassins in HERstory. “I think we needed her, although her drag is very girly, which is kind of funny, and we joke about that. We do different things, and I get compared to her quite often. She’s padded, she’s tucked, she wears tits. When she’s out of drag, she’s a woman. When she’s out of drag, she’s a boy. Whereas for me, I will wear gowns that are see-through, showing my body. I don’t do any padding or anything to make it look more feminine.” Unfortunately, a lot of drag fans still see drag as just a female illusion. Even though Drag Race has done an incredible amount for the community, the series mostly showcases fishy, feminine presenting performers. “Because Drag Race isn’t including different types of queens, who are alternative or bearded, cis or trans, it lets people know that this is the hierarchy of what the art-form is. You have Ru, who is the drag superstar of the world, picking other types of queens that are only similar to her narrative.” If the series included queens from all across the spectrum, Rify thinks it can change people’s perspectives on drag, which is why she would like to showcase her talents on a future season. She admits: “Not for the sake of being on TV, but it’s because I do think I have something to offer as a queer, Middle Eastern queen, a storyline that they’ve never had. I do wanna show pieces of drag they’ve never had because I think the community needs it. But the show isn’t designed for every type of queen to succeed. There is a format, and you have to stick within that format in order to be chosen. I think I’ll just do my thing, and if I get on, I get on, and if I don’t, then I don’t.”

People who haven’t entered the ‘Drag Olympics’ are often given the term “local queen”, but Rify Royalty is anything but. The queen has performed in London, Miami, Portland, Chicago etc, and will hopefully be taking Straight Acting to Berlin, Toronto, with her eyes set on a spot in Hackey or Dalston. “Drag is a monster now,” she says, excited. “We’ve got DragCon in LA, New York, London has their own drag convention and their own Drag Race. Thailand has Drag Race, even Chile has their own version of one. It has totally evolved, and when you go to bars here in New York City, we’ve got women who do drag and trans people who do drag, bearded people and non-binary people, so I feel like it’s definitely crossed over to different generations. I think it’s gonna keep doing that.” For Rify, her drag has even crossed over to the heterosexual community, often working corporate events for straight companies. “For a long time, gay people only had straight women as icons, we had Cher, we had Beyonce, Madonna, Britney, Christina, whatever. Now, we’ve got people within our own community that we can look up to. And I think for heterosexual people, it’s exciting for them to see other icons and people they can look up to as well that aren’t just making pop music.” Amen honey.