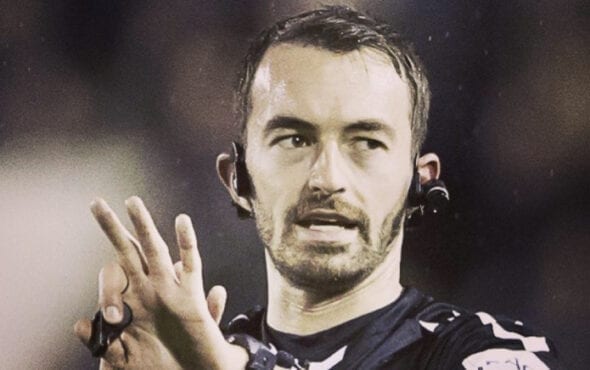 “If this helps give other people a bit of courage to speak to their families or friends or work colleagues, then just do it,”

James Childs sat down with BBC’s LGBT Sport Podcast to discuss his experience as a Super League referee.

“I don’t necessarily broadcast it but just live my life normally, and that’s the way I’ve chosen to deal with it up until now.

“And in many ways, my sexuality and my job are completely separate and it’s irrelevant,” he said.

Childs started his referee career in 2009, having been on the Rugby Football League’s elite panel for nearly 11 years.

He privately came out to his fellow referees 10 years ago but decided to open up to the public in the BBC podcast.

“The way I’ve lived my life on social media, I’m pretty open about the fact I have a male partner.

“I wasn’t quite sure what to expect but I’m delighted generally speaking that it’s been overwhelmingly positive. I think the worst I’ve seen is indifference, which is absolutely fine,” he said.

Since coming out, RFL’s acting head of match officials showcased his support for Childs, stating: “James has been an elite referee for more than a decade and has made a major contribution to the game.”

He continued: “It’s great that he is sufficiently comfortable and confident to have done this interview and we share his hope that it will help in terms of promoting respectful attitudes throughout rugby league.”

Childs also opened up about the homophobic abuse he’s received before he even came out.

“I do receive my fair share, including a couple of death threats over the past few years that have been referred to the police.

“I’m not saying that’s all to do with my sexuality, but I certainly think one, if not two of those were homophobic.

With the Super League due to start back up in the coming months, Childs hopes for the season when the fans return, stating: “The reaction today was really encouraging and I’m confident that when crowds are back in, it shouldn’t be an issue and I’m sure it won’t be. That’s pretty much what I wanted. ”