REYNA star Vic opens up about her challenging coming out journey 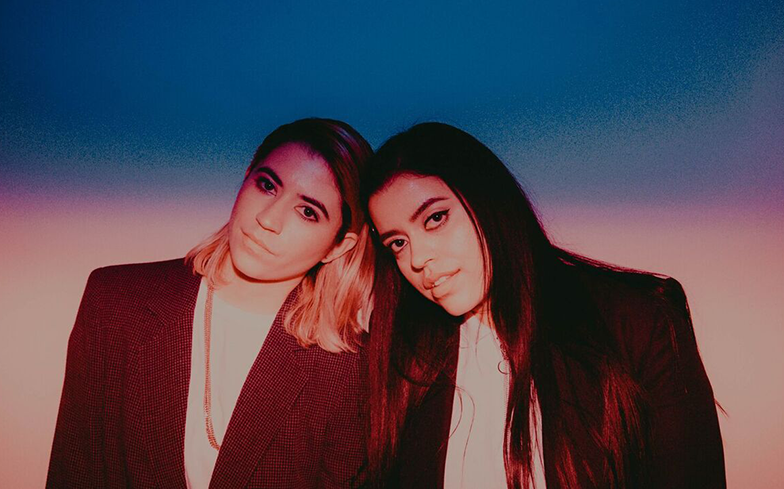 “What I inspire to do is help people like me, that are in that moment of their lives where they feel completely lost.”

American duo REYNA have added another simmering synthpop jam to their ever-growing discography.

Heartbeat – their eighth (and possibly best) release so far – will be included in the band’s upcoming debut EP, which will include the likes of Baby Forget It and Cool With It, both of which are the textbook definition of ‘pop perfection’.

Their first single, Spill Your Colours, was written as an “ode to being your true self and not conforming to what society or your family expects from you”, and was inspired by member Vic Banuelos’ “traumatic” coming out experience to her parents.

Her sister Gab however, has always been a “ferocious” supporter of her identity. We spoke to Vic over the phone about how she came to terms with her sexuality, the difficulties she faced coming out to her family, and how she and her sister incorporate their life experiences into their music.

How did you and your sister get into music?
We started playing music when we were 11. I was 11, she was 9. We’ve always been singing together, our grandma was a mariachi singer and she was in this big mariachi band and she would always make us sing with her at shows. So it grew on us forever, and then we picked up our guitar and started writing songs from a young age. We’ve been at it ever since! When did you both come to the conclusion that you wanted to be an actual duo?
It’s funny because we uploaded a song to this website in 2012. MTV picked it up for the American version of Skins, and when we saw the episode with our song in, we were like, ‘Oh my god. This is amazing. I guess we should take this seriously?’ That was the moment when we thought, ‘We can do this.’

Who were both of your influences growing up?
The OC had such amazing music [laughs]. Being able to see the bands performing on the show was something that we were so inspired by, and we wanted to be on that show so bad! We also love Selena, Rolling Stones, The Who is a big influence for us. Now I think, Tegan & Sara, we absolutely love them. We thought, ‘If they can do it, and they’re sisters and they’re thriving, then we can also do it.’

Your debut single Spill Your Colours was written as an ode to being your true self and not conforming. Is it important for you both to champion authenticity in your music?
Of course. If you’re not being yourself within your own music, nobody’s gonna get it.

You’re openly gay. Has this influenced you as an artist?
I think that it’s such an interesting dynamic with my sister and I because she’s straight, and she’s obviously writing it from a different perspective than I am. We both have different experiences. Coming out for me was so traumatic and heartbreaking, so all of those feelings and emotions have influenced the way that I write, which is probably where Spill Your Colours came from. My sister is super supportive, and it’s impacted her life, because we had wars in our family over this. You have to take a side. It’s definitely added a dynamic to our music.

You said there were wars in your family. How was your coming out experience to them?
I was 19 and it took me a long time to know that I was gay and to come out to myself. So, I had no idea throughout my whole high school career [laughs]. I was kind of a loner, and I couldn’t figure myself out. Once I realised that I was gay and I came out to my parents… We are a very Christian family. We grew up in the church, so it was a huge blow to my parents. I think it took them maybe six or seven years to kind of be okay with it. I got married last year, and I think that was the moment when my parents were like, ‘Oh my god, all these people are here and they’re okay with it?’ So it was like validation for them. But yeah, the coming out part was very traumatic. It put a dark cloud over our family for a while.

Was your sister always supportive of you?
Yes. I remember when I came out to her, I was like, ‘I need to tell you something.’ I started crying, and she was like, ‘What? You’re gay?’ [laughs]. And then it completely changed her for me, and it made it so easy because I started laughing and I was like, ‘How do you know?’ She was like, ‘I’ve known forever. I’ve always known.’ She was my warrior with my own struggles, and my family and everything.

Was it difficult for her to be on one side, when your family opposed who you were?
Yeah, but oh my god, she is ferocious. When she loves you, nothing can come between that love. She totally fought for me and for us. You grew up in Texas. What is the LGBTQ community like in such a conservative area?
It’s still quite conservative. I didn’t know one gay person in high school, so I think that was part of the reason why I didn’t know what was going on with me. I haven’t lived there in ten years, I’m now living in Milwaukee, but I know that there are people who oppose same-sex marriage, adoption for gay couples… I know it’s still going on. In Milwaukee though, it’s way more liberal. This is where I found myself, and I couldn’t be more thankful to move here when I was 19.

Thanks for being so open. It can’t be easy talking about all this to someone you’ve never met before.
Of course! I think it’s great. What I inspire to do is help people like me, that are in that moment of their lives where they feel completely lost. Hopefully, they can find some comfort in this, relating to someone.

Do you think it’s important, in this day and age, to have queer perspectives in music?
Oh definitely. I don’t wanna bring up Tegan & Sara again, but they were so eye-opening for me. I’ve got a funny story about them, you know the Get Along DVD? So they had a contest and they had 300 people send in their picture. So, they picked my picture and I was in the audience for that, and I got to go to Vancouver and see them record their album for like eight hours. It was epic!

That’s amazing. I love them. So your newest single, Heartbeat, is another slice of pop perfection. Can you tell me the story behind the song?
My sister was in a relationship and they were on and off, taking breaks. They weren’t sure if they wanted to commit yet, be together for real. It was midnight, and Gab’s boyfriend shows up and is playing the song Harvest Moon by Neil Young in his car [laughs]. He texted her and told her to come out and he was like, ‘Okay. That’s it. No more being away from each other.’ That was the moment when they were official. So that was the inspiration for Heartbeat.

Bloody hell. That’s enough to make you fall in love with anyone.
For sure! Yeah, so romantic. She hates it, because my sister is super not lovey-dovey, you know? That’s why it made such an impact on her, because she’s kind of standoffish but then this guy just came…

Heartbeat will you be your eighth single so far, what are your future plans for releasing music? Can we expect an EP or an album?
We want to do a two part EP. We’re gonna release an EP this year that will include Cool With It, Baby Forget It and Heartbeat, plus a bonus track. Next year we’ll release a part two with another five songs. Do you think that albums are dying?
I think so. It’s kind of hard to connect with people. That’s what it’s come to on Spotify, they’ve changed the game so much. You wanna attract people within the first ten seconds. I think that it’s cool, especially for up-and-coming artists, we need to focus on getting a fanbase where we can get to the point where we can put out anything and we know that people are there to listen. Putting out a single, you spend so much time with it, and you’re just so in love with the song and what you did for it, that you really pour your heart out and try to promote it the right way.

If fans come to a REYNA show, what can they expect? What will the vibe be?
We always try to put on a dance party. We also have a lot of banter between my sister and I, especially if something happens that we have to talk about. We want to make it feel like you’re in our living room, but also at a party dancing.

So it’s basically like watching a family on stage?
[Laughs] Exactly. For sure.