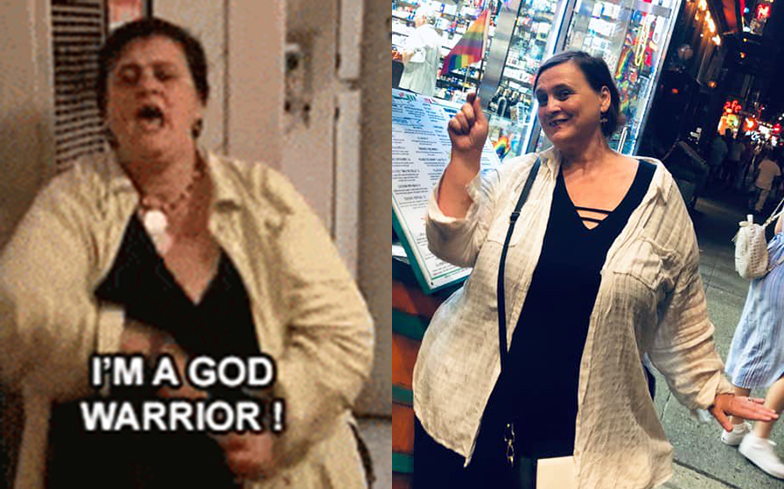 This is the kind of progress we like to see in the world.

Before memes and viral videos were a daily occurrence in our lives, there was the God Warrior.

Marguerite Perrin first entered the public conscience when she appeared on Trading Spouses – that’s basically Wife Swap to UK readers – a show where two families of different backgrounds or beliefs swap wives or husbands for a week.

She famously had one of the biggest meltdowns in reality TV history during her episode, accusing the other family of being “dark-sided” and proclaiming herself to be a “god warrior” – an iconic speech which people still quote to this day.

We haven’t heard much about Marguerite since her episode aired, but over a decade later, she’s been popping up across our social media timelines waving rainbow flags and posing for photos with people celebrating Pride.

Of all the people to emerge as an LGBTQ ally this year, we never expected it to be Marguerite. But we welcome her with open arms.

Later on, Twitter user @politicalth0t shared a group photo with Marguerite, calling her “a whole legend” which we can all agree on.

WE JUST MET THE GOD WARRIOR IN NYC LMAOOO A WHOLE LEGEND pic.twitter.com/55CCJuEPxz

When people questioned her ally credentials, he followed up: “For everyone asking, she was extremely nice and told us to ‘never stop being true to yourself, and never stop screaming’ (we screamed when we saw her).”

For many people in the queer community, it’s a relief to know that their favourite legends support them for who they are, so God Warrior fans have reacted well to the knowledge that she’s an LGBTQ ally.

it’s been such a great week for God Warrior stans 😭 pic.twitter.com/xupzZP8hUg

If you had Marguerite Perrin a/k/a “God Warrior” becomes gay icon at World Pride on your 2019 bingo card, I believe you won.