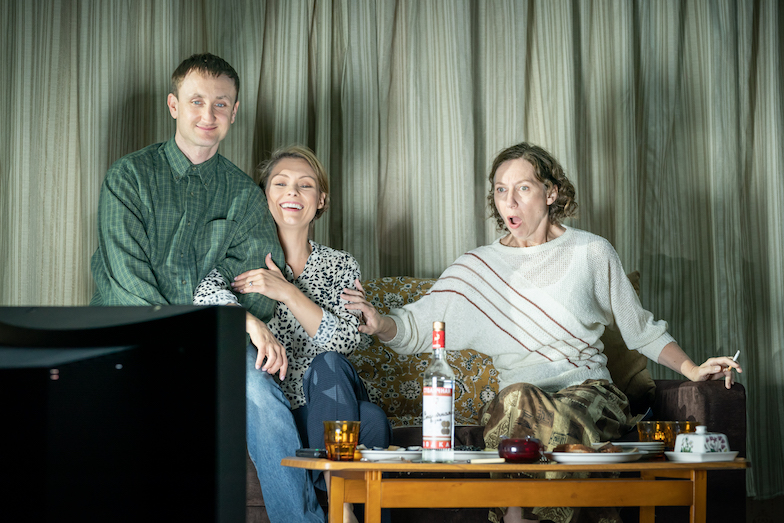 Lucy Prebble’s play, based on the book by Luke Harding, has premiered at The Old Vic, directed by John Crowley.

We find it increasingly rare that a show really takes us by surprise, but A Very Expensive Poison is certainly one of the most surreal theatrical productions we’ve witnessed in some time. Frankly it’s an absurd concept; re-imagining the events which led to the assassination of ex-KGB officer Alexander Litvinenko as a comedy, featuring oversized puppets and musical numbers, is as ludicrous as it sounds. Thankfully it’s an inventive and rather enjoyable experience at the same time.

The play focuses on the lives of Alexander Litvinenko (Tom Brooke) and his wife Marina (MyAnna Buring). Opening in a scene set in a London cafe – not quite present day, but recent enough for Chris Grayling to be referenced as Justice Secretary – we meet Marina as she is seeking advice regarding a full inquiry into her husband’s murder. We’re then transported back to the moment Alexander is admitted to Barnet General Hospital and, realising that his condition is fatal, he starts filling officers in on the events that could have led to his death, beginning in the mid-1990s when he started working for the Russian state.

Over the course of the show we are introduced to a variety of figures who played a key role in Alexander’s story. Most notable is billionaire businessman Boris Bereszovsky (Peter Polycarpou) – a wonderfully eccentric performance, we first encounter him dancing the robot at a party and he only becomes more flamboyant, bursting into song while having dinner at Scott’s in Mayfair. We also gain an insight into corruption at the very highest offices of state.

Reece Shearsmith delights in a wonderfully Machiavellian depiction of Vladimir Putin. While he does play a bit-part in the main story, he mainly functions as narrator, regularly breaking the fourth wall to address the audience directly. With many of the play’s events unfolding in London, it does feel very meta to observe the Russian president baulk at the cost of a programme at a theatre which expects its patrons to use portaloos outside (The Old Vic is undergoing some refurbishment works).

A Very Expensive Poison is rather more fun than we were expecting given the serious events at the heart of its story. It’s a big, bold, creative production, which takes a bit of getting used to, but go in with an open mind and we’re sure you’ll find something surprisingly enjoyable.