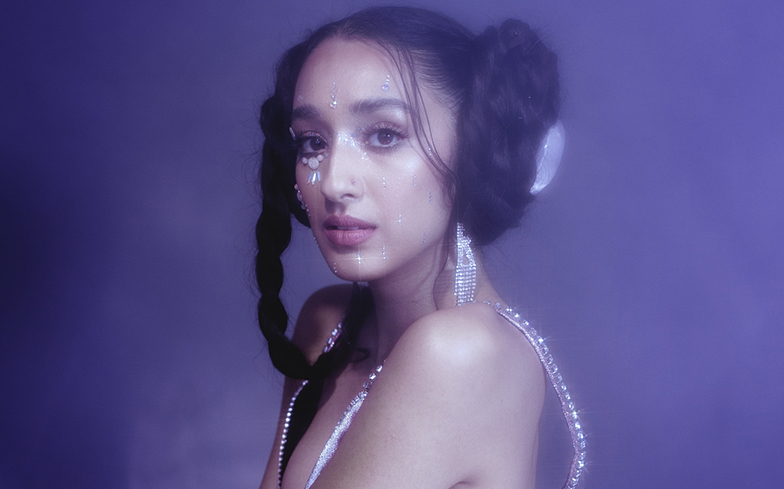 With dreamy production and ethereal lyrics, Raveena is making music for those who wear their hearts on their sleeves when it comes to life and love.

She’s released two beloved EPs and a full-length album, directs her own music videos and maintains creative control over her art, making her an inspiration for many. But perhaps more importantly, she’s doing this as a queer Indian-American woman. It’s an intersection of multiple identities we don’t often see in music – not least music that’s racking up millions of streams online – and it’s something that’s helped her find self-empowerment.

“I think being a minority person, a queer woman and a person of colour, I’ve had so much authority and control stripped away from me since I was little,” she explains. “Owning that space in a visual world has been so empowering for me and so important to my growth as an artist.”

We spoke to Raveena about her coming out journey, the stigma that bisexual people still face, and why she won’t follow “silly industry rules” when making the music she wants to make.

I’ve noticed a lot of your fans talk about crying to your music, but in a on positive people’s way. emotions? Does it feel strange knowing you have that impact?
I hope that I make music you can cry to! That’s one of the main things I like to do when I listen to music. If anything it makes me feel honoured that I can share that space in people’s lives. I definitely want to make something where people feel seen and they feel heard.

Starflower is a really beautiful song, and one of my favourites. What does that track mean to you?
I was thinking about all these women who have carried so much pain, and so much of other people’s pain and traumas, in their lives and their wombs and their bodies. We often take on this very unseen role of taking on so much emotional labour for other people, so that was kind of what that song was about, and I wanted to write about escaping that feeling for a second and remembering that you’re also just a human among this larger universe and this bed of stars, just having that heavenly and divine feeling that nobody can take away from you.

What would you say are the major themes that connect all your music?
I think the main themes are self-discovery, healing from trauma and romantic love, but also exploring the weight that comes with that, because everyone has their own attachment issues and baggage that they bring to their relationships. My music is pretty all-encompassing, I just try to write from this really honest and vulnerable and raw place. It’s always very reflective of what’s going on in my life.

It feels like there are a new generation of artists who are choosing to be open about their sexuality early on rather than having a big coming out moment later in their career. Was that something that was important for you?
It’s funny, because I don’t even think I was planning on coming out, it just kind of happened when I wrote a song about this woman. I didn’t realise the whole weight of it when it was happening, but I’m so happy I did it because it helped me come into my sexuality in this new way. I think before you come out – at least in my experience – it was harder to really take ownership of my identity and feel comfortable fully exploring things. That moment was really defining for me, and I love to hear stories about how it’s helped other people, especially South Asian women, who’ve told me how much more comfortable they feel coming out because I was so public about it. A big reason why I didn’t want to come out was because I was scared of family reaction, and I definitely dealt with some backlash, but I also had it pretty lucky, and I totally understand why especially in the Asian community a lot of people are afraid to come out because their families can be very negative and they can face scary consequences. So I send solidarity to people who are scared to come out.

There is a perception in the Western world that being queer just isn’t an option for people within the South Asian community, that those two things can’t co-exist. From your experience, do you think that’s an unfair view?
No, I think that’s definitely the case. It is very hard because there’s just straight-up severe homophobia in our culture, and there have been really dire consequences for people in the past. I’m lucky because I live a life of certain privilege as an artist, as someone who’s in America, and I have a huge community of queer people around me too, so I’m sheltered from a lot of those real dire consequences of being openly queer and South Asian, and I’m very sensitive that a lot of people don’t have those privileges. So yeah, it’s definitely hard, and it can definitely be scary, but hopefully I can inspire even the older generation to think, ‘Here’s an artist whose music I love, and they’re being open about this, so maybe my child can too’.

What advice would you have for people from South Asian families who are going through the same thing?
I would just say keep exploring and keep putting yourself out there. Maybe your family doesn’t have to know, but I’m sure you’ll find friends who are supportive and you’ll find people in the queer community who will support you. Once you get surrounded by that love it becomes a lot easier. There’s really nothing to be ashamed about with your queerness, it’s just an expression and it’s a very natural part of life.

I think it’s really lovely what you said about not intending to come out, that it just happened naturally. Do you think that’s the future? Where people don’t have to have a big coming out moment?
Yeah, probably! My friend said something really interesting the other day, he said, ‘Coming out is to tell straight people that you’re out’, and I totally resonate with that because really your queerness is for yourself. It helps to come out because then you’re signalling to other queer people that you’re available – that was probably the most helpful part of it for me – but no one needs your answers or your identity. No one deserves that or can ask that from you, that’s yours and you don’t owe anyone an explanation. I had that in the beginning of my career, where other queer people were upset that I had subtle queer themes in my music but I hadn’t publicly come out yet, and I thought that was really negative and toxic to say, ‘You have to come out to be able to talk about these things’. I don’t think you owe anyone an explanation.

It does seem there’s still a stigma attached to being bisexual, where people assume it’s a stepping stone or a phase. Is this something you’ve experienced?
Oh my god, all the time. I think that’s the main thing we struggle with, from talking to other people in the bisexual community. I’ve even had some family members or queer friends say, ‘Oh, that’s so slutty’, or, ‘Why can’t you be a full lesbian who just commits to one person?’ You get people saying you’re promiscuous for being bisexual and hyper-sexualising you, I go through that all the time. With men especially, they think your sexuality is hot and they only like it because they can envision themselves being a part of it, but when it comes to just fully being with another woman they’re uncomfortable with that. But I think every pocket of the queer community has their own struggles, and that’s what we relate to each other about and that’s how we can empathise with each other and hopefully make things better.

In the past artists would usually have at least a couple of years off between album cycles, but you just released a new EP five months after your debut album. It seems the music industry is heading this way now. Is that an approach you enjoy?
I definitely like to take my time with full albums, because I like to pull people into a whole universe and take time to carve out every detail of that universe, so I’m definitely going to take my time on the full sophomore album. But in the meantime I love releasing things that come up in the studio that don’t feel like they fit on those kind of projects, that’s the way I work, I’m always creating lots of music. I don’t mind sharing it and it works with how we make music now. But also, art comes at your own time, and you should take time. There’s no pressure. Submitting yourself to all those silly industry rules is always gonna lead to a negative thing.

Finally, are there any standout albums that have been special to you and inspired you through life?
Definitely Lovers Rock by Sade, that was really important for me; Jai Paul’s demos album; Back To Black by Amy Winehouse; The Miseducation of Lauryn Hill, those kind of albums, for sure.