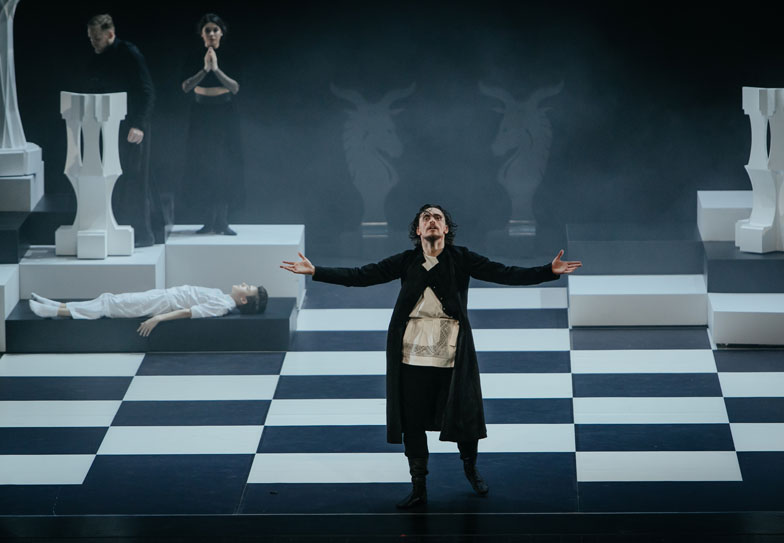 Over the weekend we were invited to review the world premiere of this new production of Rasputin, starring Sergei Polunin in the title role. It focuses on the story of Grigori Rasputin, the Russian mystic who befriended Tsar Nicholas II. The cavernous Palladium is the setting for each of Polunin’s productions; this one unfolds upon an impressive oversized chessboard set. It’s not a subtle metaphor – we got that this was a show about power and politics, and that we were observing the key players – but it looks gorgeous and stylish nonetheless.

The programme makes the bold claim that ballet is ready to evolve and integrate into mass culture, and this is certainly far from a traditional performance. It’s an entertaining, modern twist on ballet – although at times we felt there was very little emphasis on dance which was technically demanding or impressive, instead focusing on wildly over-the-top dramatic movement. That’s not to say it wasn’t an enjoyable show to watch, but there were only a handful of beautifully choreographed moments and we’d had liked some more.

It also felt a tad short. The curtain came down on act one just 30 minutes after it rose, and the second act wasn’t much longer. Even factoring in a late start, a weighty interval and a substantial curtain call, the whole production lasted scarcely 90 minutes. We thought that those who had paid full whack for top tier tickets may have felt short-changed by the meagre handful of snippets of genuinely great ballet on display tonight.

Although it was an entertaining show overall, we weren’t quite sure who would derive the most enjoyment from Rasputin. Purists may be put off by the brevity of the performance and relative lack of traditional ballet technique, while it seems an unusual story and subject matter if the aim of the show is to appeal to a broader audience. It’s far from a disaster, and it has its moments, but nor is it a resounding success either.