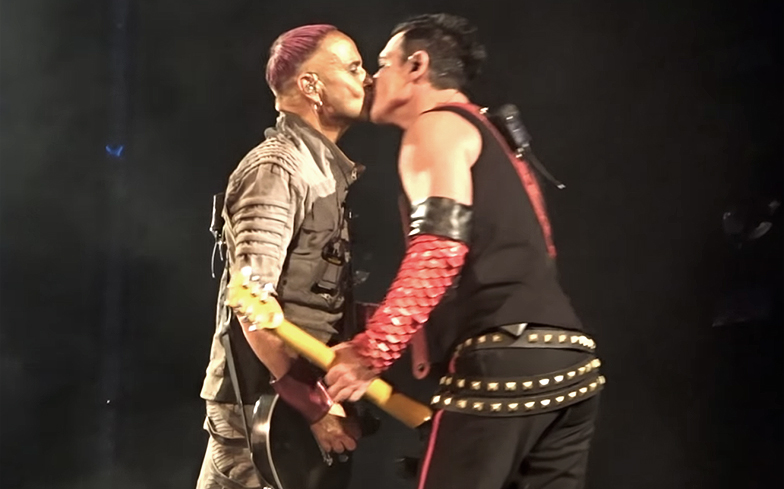 Rammstein are showing their true colours as LGBTQ allies.

Two members of the German heavy metal band, guitarists Paul Landers and Richard Kruspe, shared a kiss on stage during a performance in Russia’s capital city Moscow to protest the country’s anti-LGBTQ attitudes and laws.

Rammstein shared a photo of the kiss, which took place during their song Aüslander, on their Instagram page alongside the caption: “Russia, we love you!”

It’s not the first time the band have shown support for LGBTQ rights on this tour – during a performance in Poland, the band waved rainbow Pride flags as they crowd-surfed in a rubber dinghy.

The bold statement came after reports that members of Poland’s LGBTQ community had faced violence during a Pride march in the country, as well as reports of ‘LGBT-free’ zones being promoted by bigots.

Rammstein’s show of support for LGBTQ people has gone down very well with fans of the band.

lgbt flags in poland, a mlm kiss in russia, rammstein doesn't give a fuck and i love it

I love this band so so much ????
Just when I thought I couldn't love them more than I already do, here they come, waving pride flags and openly supporting LGBTQ people. Thank you Rammstein for being the most amazing human beings one could ask for! ????????️‍????#Rammstein #Pride pic.twitter.com/PDvIBKAu7p

rammstein having two guys kiss in a show in Russia is donkey dick energy pic.twitter.com/FKfXkRymfT