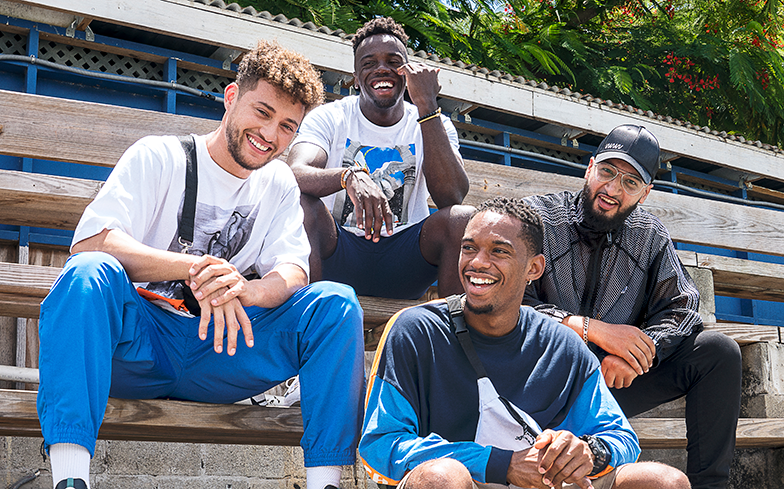 “It doesn’t matter who you are or what you like, we want our music to appeal to everybody.”

British band Rak-Su made history last year when they became the first male group to win The X Factor. During their time on the series, the band changed the motherfucking game by performing original bop after original bop, which included the likes of I’m Feeling You, Mamacita, Mona Lisa and Dimelo, the latter of which charted at number two in the UK.

After keeping us waiting for ten months, the band are back with the absolute banger I Want You to Freak, which includes a sample of Adina Howard’s iconic R&B classic, Freak Like Me.

Gay Times caught up with Rak-Su member Myles Stephenson to discuss their new single and why making inclusive music is a “massive factor” for the band.

How have you found the reaction to I Want You to Freak?
Yeah, it’s been good to be honest. It has been. We’ve been getting a lot of support off music platforms, and the response from fans and the general public has been great. The video dropped a couple days ago as well, so we’re feeling very positive and hopefully we can keep climbing up the charts!

I love the use of Adina Howard’s sample. Sugababes did it, and now you’ve put your own spin on it…
Yeah! It started from Adina, and Sugababes had their imprint on it. We just wanted to bring it to 2018 and put our stamp on it as well. It’s a song we’ve all grown up around and it’s obviously old school R&B.

It looks like the music video was fun to film?
Yeah it was good! We flew out to the Caribbean, got it all filmed in one day. It was a long day, but the visual turned out really good, and we’re all really happy with the visuals. It’s nice to know that it’s paid off!

Are the songs you performed on X Factor going to be on the album? Because they were bops.
[Laughs] You liked them ones yeah?

Oh yeah, you guys provided bop after bop.
Yeah, they’re potentially making the album. I won’t give away which ones might be, I think it’s best to leave that down to the date of the album drop.

Can you give us a rough idea of when we might expect the album?
I’m not too sure. Either towards the end of this year or the start of next year. Definitely soon though! You won’t be waiting too much longer. Fingers crossed that the music that we release before the album does its job, and hopefully we can build from there and try to take over the world!

How important is it for you guys to make sure that your music is inclusive so that it can appeal to people from a diverse range of communities?
That’s a massive factor. At the end of the day, we make music because we love music. It’s not set for anybody specifically, but we want music to make people feel good, and make people have energy and life, no matter who they are. It doesn’t matter who you are or what you like, we want our music to appeal to everybody, and hopefully it does because it’s a passion of ours.

Have you noticed that you’ve got a big gay following?
[Laughs] The band?

And individually…
Yeah! Our following is our following. It doesn’t matter if it’s a gay following or a heterosexual following, it doesn’t matter. A following is a following! It’s a blessing. Saying that, the gay community are so strong, and one of my old work colleagues is a really good friend of mine, and he’s part of the LGBTQ community. He brags to all his friends that he knows me, and knows Ashley! [Laughs] Yeah, it’s good and it’s nice to know that we are making fans in all communities. It’s honestly a nice feeling. What surprised you most about your X Factor experience last year?
It was like a crash course. It was tougher than I thought it was. I think the boys would all vouch as well. It’s a crash course into the music industry and it’s a machine. Especially for us, because we were doing our original music, there was no time to sit back, no time to lay off. We had to be foot to the pedal at all times, because we had to make sure that the content we were bringing out was good enough. It was challenging, but it’s still an unbelievable platform to this day.

Surely you guys were fucking knackered last year, because you were churning our original song after original song…
Yeah, although we did one or two covers, we still had to put our spin on it. Although it was a cover, me and Ashley wrote separate pieces for it as well, and there was a stage during the audition that I had to reproduce part of the instrumental because we weren’t given clearance to rap over a certain part of the song. It was hard but writing is what we do. It’s the fun part of music, expressing our emotions and putting them on paper. We were turning over five, six songs a week, and then one of them would get accepted, so we would perform that song on the Saturday or the Sunday, and then we’d have to learn the lyrics and the choreo at the same time…

How was supporting Little Mix over the summer?
It was an unbelievable experience. We’d never performed in a stadium before that, and it was 30,000 every night. It was a nice experience and it was a look into what we could potentially be doing, if all goes well, fingers crossed that it does! They’re a good bunch of girls, and we’ve gained some friends.

My final question: what can we expect from a Rak-Su performance?
I would describe our shows as energetic, fun. When our tour does come, you can expect a different side of Rak-Su as well, where we get into our feelings more, but the majority of it is upbeat, fun, and it’s gonna be a show. It’s not going to be us just standing on the stage, it’s full choreo!

Rak-Su’s brand new single I Want You to Freak is now available on iTunes and streaming services.