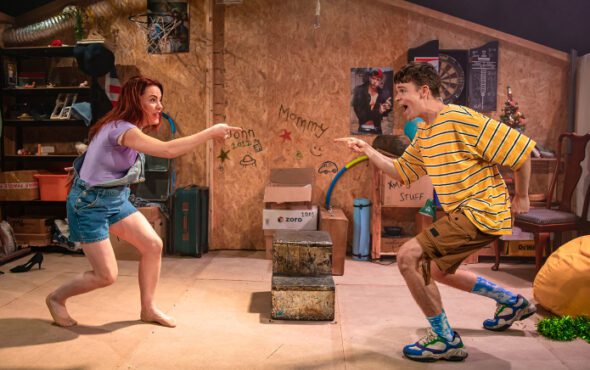 The musical by Andrew Lippa and Tom Greenwald has been revamped in a new production at the Southwark Playhouse, directed by Guy Retallack.

John & Jen is an ambitious piece of theatre. We’re introduced to John and Jen in the 1980s as brother and sister, and the first act follows their stories through school and college, going out into the real world as adults. Act two is very different – we’re still following the same Jen, but she’s older and has had a son that she’s named John after her brother – so we follow the mother-son narrative after the interval. By the end of the show things are brought right up to the present day with talk shows being hosted via Zoom – so we’re covering the events of some 35 years in around two hours. There’s a lot going on.

We feel this needs mentioning right away – both the performers in this show absolutely shine. We were expecting big things from West End and Broadway star Rachel Tucker and she truly delivers – she’s strong throughout but her 11 o’clock number raises the roof. Lewis Cornay manages to hold his own here too – he has an excellent singing voice and is thoroughly enjoyable to watch. We were pleased – and a little surprised – to see a live band, with musical director Chris Ma leading a four-piece of keys and strings. It’s easily one of the most ambitious and polished musicals we’ve seen in a studio theatre.

There’s really very little to find fault with here. The second act is notably stronger and punchier than the first, with the real standout musical moments, but the first act doesn’t exactly drag – it’s just less enjoyable by comparison. Additionally, while the timeline has been updated, some of the issues considered and the way they’re presented still feel slightly dated – but it’s hardly detrimental to proceedings.

We weren’t quite sure what to expect from John & Jen but we were thoroughly impressed with what we saw. It’s an unusual but entertaining storyline with some genuinely excellent musical numbers, and the quality of Rachel Tucker’s and Lewis Cornay’s performances is worth the admission price alone. Do yourself a favour and check it out while you can.