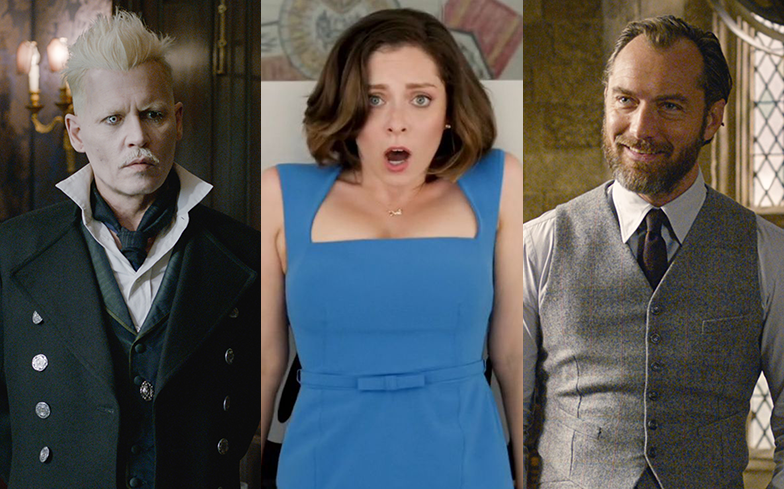 “It should be hardcore but with an Oscar-worthy screenplay.”

Rachel Bloom has offered to fund a “pornographic film” based around Dumbledore and Grindelwald from Fantastic Beasts.

The American actress, who’s best known for her Golden Globe winning role on Crazy Ex-Girlfriend, wrote on Twitter: “I will fully fund this pornographic film lmk [let me know].”

Her comments come after JK Rowling revealed the two iconic wizards had a sexual, intense relationship.

In a featurette for Fantastic Beasts: The Crimes of Grindelwald, the Harry Potter author revealed: “Their relationship was incredibly intense. It was passionate, and it was a love relationship.

“But as happens in any relationship, gay or straight or whatever label we want to put on it, one never knows really what the other person is feeling. You can’t know, you can believe you know.”

She continued: “So I’m less interested in the sexual side — though I believe there is a sexual dimension to this relationship — than I am in the sense of the emotions they felt for each other, which ultimately is the most fascinating thing about all human relationships.”

JK Rowling famously revealed that Dumbledore identifies as a gay man after she published the seventh and final Harry Potter book, Deathly Hallows.

I will fully fund this pornographic film lmk https://t.co/aDujbke7iZ

However, fans were left disappointed last year year when The Crimes of Grindelwald’s director, David Yates, suggested that the Hogwarts teacher’s homosexuality wouldn’t be “explicit” in the Harry Potter prequel.

Although his sexuality wasn’t touched upon in the blockbuster, star Ezra Miller said his identity was clearly defined in the film.

He added: “Nothing more than the most desperate desire of your heart. If that’s not explicitly gay, I don’t know what is.

“People have to also take a moment and acknowledge the gift that Jo Rowling gave us by writing one of the greatest characters in literary history.

Upon release, it received mixed reviews from critics and (only) grossed $653 million worldwide, meaning it’s the least successful film in the whole Wizarding World franchise.