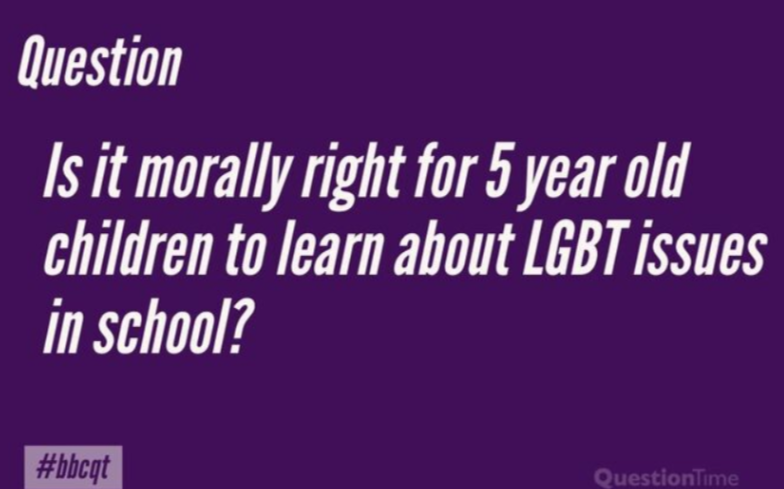 The question attracted groans once it was asked.

Question Time has landed itself in hot water after an audience member questioned whether it was “morally right for 5 year old children to learn about LGBT issues in school?”

The question came following weeks of protests outside Birmingham schools teaching the No Outsiders programme, an initiative that simply aims to teach children about diversity and acceptance.

All of the panellists, including Education Secretary Damian Hinds, Shadow Brexit Minister Jenny Chapman, Next’s Chief Executive Lord Simon Wolfson, MoneyWeek editor Merryn Somerset Webb and former Greek Finance Minister Yanis Varoufakis, as well as a vast majority of the audience members who spoke, were in favour of the lessons.

In his answer, Hinds made reference to the LGBTQ-inclusive guidance that was passed this week, saying: “I think it is right, and this is reflected in the new guidance, that during the course of a child’s schooling, they do learn about LGBT+ relationships as part of the diversity of our country.

“That is the type of country that we live in, where there are different types of relationships and you could have another child in your class who has same-sex parents.

“It is much safer to have a child hear about that and discuss that in a safe environment, from a teacher, than it is to pick it up on the internet or from other kids.”

Chapman agreed, saying: “I think it’s quite important that this is happening, and I think it’s about time that we taught our children about healthy friendships and relationships, and the fact that not everybody grows up in the exact same family situation.”

And in one response, an audience member said: I think it’s irresponsible not to be teaching it to five-year-olds, or any age group for that matter, because children, as you’ve already said, may have same-sex parents themselves, same-sex relations, friends or whatever and children need to feel safe and comfortable wherever they are, in the home or the school, wherever they are.

“And that’s part of their security, knowing that the people they love, and who love them, are loved unconditionally irrespective of their sexuality.”

This audience member says it would be ‘irresponsible’ not to teach LGBT to five-year-olds. #bbcqt pic.twitter.com/MxrDrv84Qi

Because of the phrasing of the question, the show created a heated response online, with many questioning why the BBC thought the phrasing was acceptable.

Hey, heterosexuals. Have you ever had your existence framed as a moral debate? No? Maybe spend a little time thinking about what that would be like. https://t.co/kXK3vD6Sdl

Next week: our final question is about learning about women at school. ‘Is it morally right for 5 year old children to learn about women’s issues in school?’

Week after: ‘is it morally right for 5 year old children to learn about Muslim issues in school?’

Get in the sea. https://t.co/f1KPRBnNNY

Related: The Economist faces backlash for tweet asking if trans people should be ‘sterilised’