Queereteria TV is queer escapism at its best – review 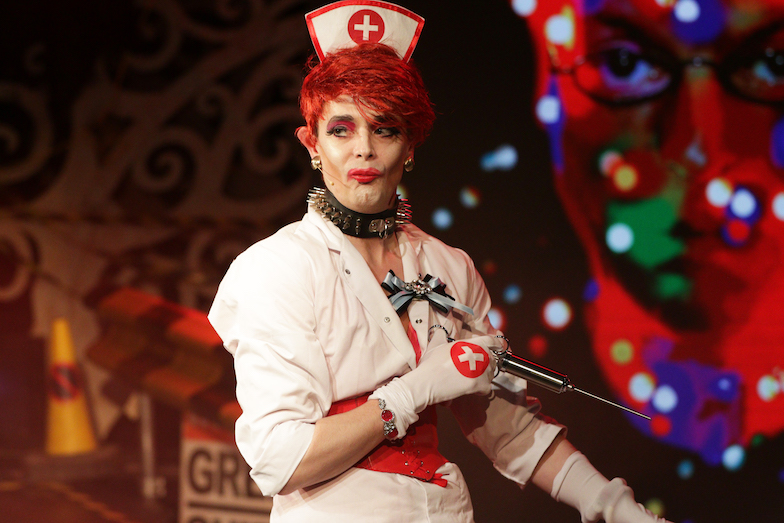 In a devastated post-apocalyptic world, an unlikely assortment of queer people are in control of the the only remaining broadcast; Welcome to Queereteria TV.

This is the third theatrical outing for Erasure’s Andy Bell as Torsten – the immortal libertine who seems to transcend space, time, and gender. But don’t worry, you don’t need to have seen any of the previous instalments to enjoy what’s on offer here. This is a self-contained carnival of the absurd that’s crammed to the brim with exotic sensory stimulation.

As we join the story, Lady Domina Bizarre has taken control of the TV station, and is keeping Torsten imprisoned in a cryogenic chamber – only reviving him occasionally for the amusement of the audience. Poking him with a cattle-prod to vicious chants of ‘Twitch you bitch’. Matthew Baldwin, familiar to Stag audiences as the Dame from the last several pantos, absolutely owns the part of Lady Bizarre, purring with a sexually charged menace that is disturbing and hilarious in equal measure.

Author Barney Ashton-Bullock makes a very welcome stage appearance as Torsten’s lover Daniel, who is attempting to free Torsten from captivity. Ashton-Bullock is completely in control of this creation, his fantasy realm, and as such is perfectly placed to move through it with elegance and precision. There are also a couple of superb performances from Tom Mann as Young Torsten and William Spencer as Young Daniel. Spencer is also responsible for the beautiful choreography.

The main draw here, of course, is Andy Bell as the titular Torsten. Bell gets plenty of opportunity to impress with his legendary vocals, the highlight for us being the song We Hadn’t Slept For Twenty Years performed as a duet with Ashton-Bullock at the show’s climax. The music, by Christopher Frost, is an integral part of this odyssey of oddity.

The script is subversive and sublime. There are recreations of well-known reality shows, all with a queer twist, ‘penis cams’, and vagina songs. It’s a grotesque parody of popular culture pushed to its limits. Set, lighting, and effects by David Shields and Michael Brenkley complete the illusion; we are truly transported to another world, where anything can happen, and often does.

This is queer escapism at its best. Twisted, hilarious, verging on pantomimic but with something to say about us all. Tune in to Queereteria TV, and do not adjust your set!